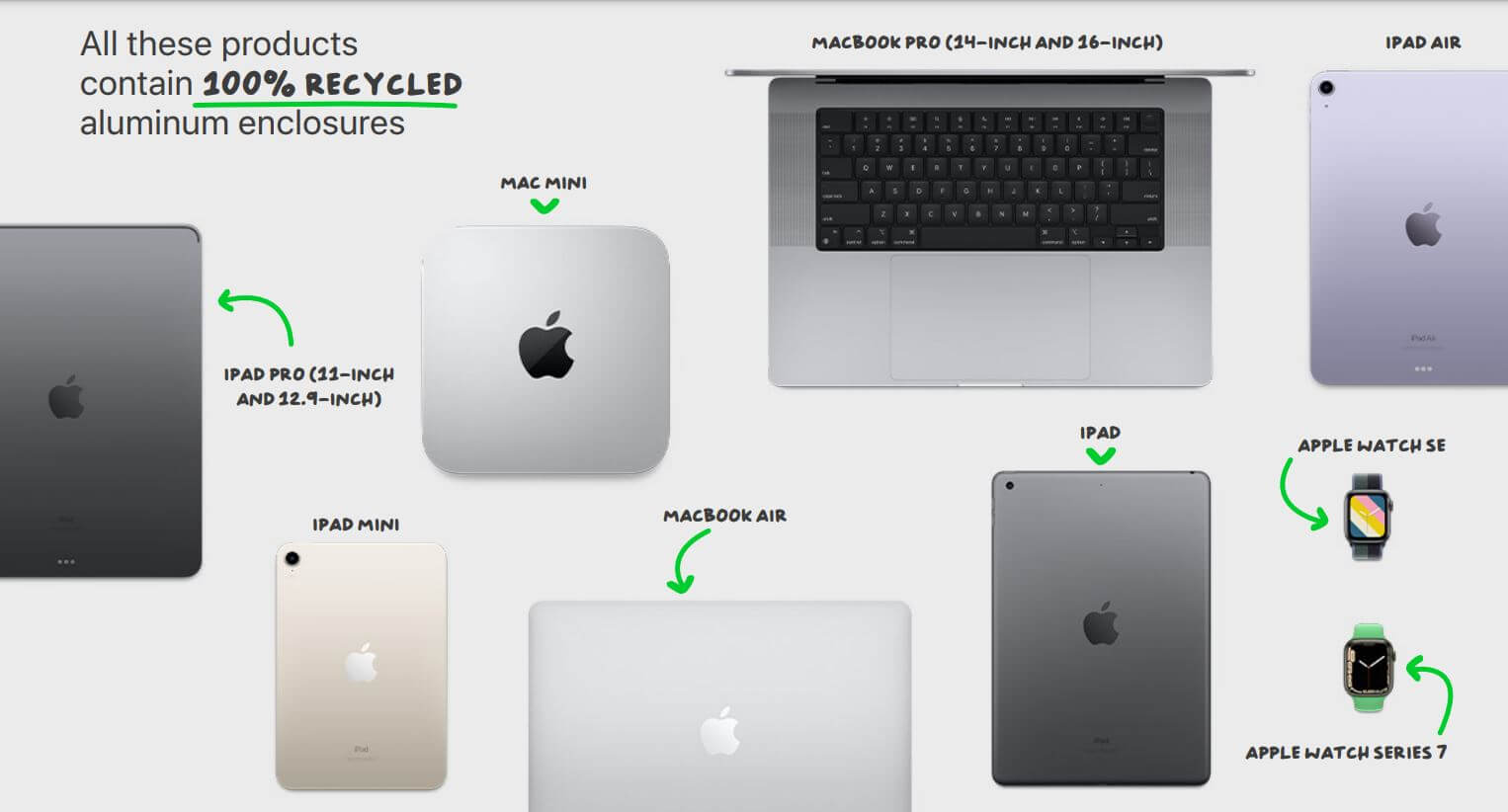 Earth Day is almost upon us and Apple has just published its Environmental Progress Report for 2022, which details the company’s recycling efforts. This is one of the key steps Apple is taking to further emphasize its commitment to reducing its environmental impact and continue to fight against climate change.

Apple has introduced recycled gold into the supply chain while doubling the use of recycled tungsten, rare earth chemical elements and cobalt: in this way, about 20% of the materials used in Apple products are recycled.

According to the company’s Environmental Progress Report, Apple has recycled 59% of aluminum, 45% of rare earths and 13% of cobalt. In addition to that, 100% of the tin and gold used in all the new 2021 iPhone, iPad, Air Pods and Mac lines come from its recycling efforts.
Since as early as 2015 Apple has reduced the plastic used for packaging its products by as much as 75%.

Part of the effort to recover and recycle these materials is attributed to Taz, a recycling robot that Apple mentioned for the first time in the report. The machine uses a technology similar to that of a shredder to recover magnets and other rare items. The credit is shared with the robots who are at Taz’s side: the now-famous Daisy, who does an amazing job at disassembling the devices, and its ‘partner’ Dave, who in turn, is in charge of recovering magnets, rare earths, tungsten and steel.

The Environmental Progress Report also addresses the issue of environmental sustainability in a broader sense, detailing not just Apple’s past efforts but also what it intends to do in the future to reach its goal of becoming carbon neutral by 2030.

The ball is essentially in the hands of the company’s partners, who are required to make considerable efforts since Apple has already been able of using only renewable power sources as of 2018 for its offices, shops and data centers.

To celebrate Earth Day, Apple is planning a series of initiatives that stretch across its entire range of products and services:

On Apple Fitness + the users will find yoga, meditation, cycling, rowing and treadmill exercises inspired by nature, a new episode of Time to Run that makes the listener “travel” through the beautiful sights and sounds of Yosemite National Park with a pop and rock playlist as well as a new episode of Time to Walk with Dr. Jane Goodall, renowned scientist and environmentalist.

On Apple Watch, if you manage to complete a full training lasting just half an hour, you will win a limited-edition prize.

Apple Pay will donate $1 to the World Wildlife Fund for ever purchase made with Apple Pay on apple.com, the online Apple Store or in any of the company’s physical stores. Last but not least, Apple Maps will make the identification of green areas, pedestrian and mountain paths more easily available and visible, especially in the U.S and Canada.