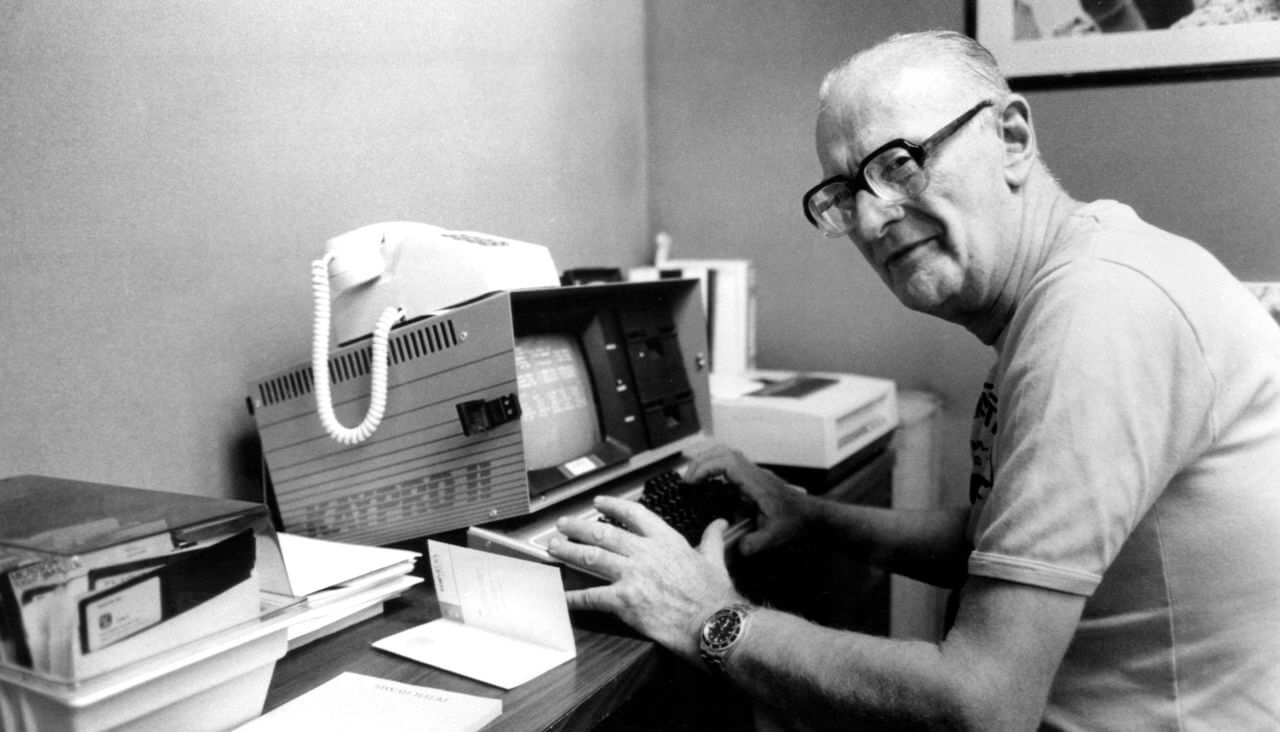 From satellites everywhere to remote work, this SciFi author accurately described the future.

“Trying to predict the future is a discouraging, hazardous occupation,” once said Arthur C Clarke, dubbed by many as ‘The Prophet of the Space Age’.

However, predicting the future became something that Clarke was nonetheless incredible at and his prophecies go way beyond the space age – they reach even today, when remote work is a daily reality for hundreds of millions, not just thousands of lucky digital nomads.

What is Arthur C Clarke best known for?

You might know Arthur C. Clarke as the writer of 2001: A Space Odyssey, the scifi classic directed by Stanley Kubrick, but this English writer is possibly the most influential futurist in history.

Known as one of the “Three Greats” alongside authors Robert A. Heinlein and Isaac Asimov, he had a first-class degree in mathematics and physics from King’s College London, was twice the chairman of the British Interplanetary Society.

A trivia unrelated to his science or writing activities but fascinating nonetheless, he was an enthusiastic scuba diver who discovered the ancient underwater ruins of the Koneswaram Temple. No wonder he was appointed as a  Commander of the Order of the British Empire!

Arthur C. Clarke’s predictions accurately outlined the shape of things to come, decades into his future, and influenced generations of scientists to work to achieve his vision.

With a body of work spanning over 60 years, his ‘hard’ sci-fi (backed by science) and various talks have, since the early 60s, predicted what might come to pass in the 21st century.

Here are some of the most incredible ones.

Did Arthur C Clarke invent the satellite? No, but he was the man who envisioned a huge network of communication satellites to create a global relay network.

In February 1945, towards the end of World War 2, he wrote an essay for Wireless World mentioning “a possibility of the more remote future”, perhaps achievable 50 years later.

“An “artificial satellite” at the correct distance from the earth would make one revolution every 24 hours; i.e., it would remain stationary above the same spot and would be within optical range of nearly half the earth’s surface. Three repeater stations, 120 degrees apart in the correct orbit, could give television and microwave coverage to the entire planet.”

These geosynchronous satellites came much earlier than expected, in 1963, and their orbit is now named after Clarke (the space they occupy is called a Clarke orbit). His vision is best contained in Tesla’s Starlink Project, which sent up hundreds of satellites and aims for thousands in a bid to offer high-speed internet service around the world.

From all his career, he said that this was ‘the only original idea of my life’ – a modest statement, considering the rest of his predictions.

So, did Arthur C Clarke predict the Internet?

The answer is once again “no” but the author did envision our current lifestyle with a surprising degree of accuracy.

It’s almost impossible to pinpoint who exactly predicted the Internet, since a lot of authors and intellectuals speculated about a worldwide information network, but Arthur C Clarke was among the first to see its uses – and drawbacks.

At an MIT conference from 1976, he delivered a historical speech detailing how a personal computer connected to the web will work.

“It would be a high-definition TV screen, and a typewriter keyboard, and through this you can exchange any type of information, send messages to your friends. They can wait and when they get up they can see what messages have come in the night.”

“He will have in his own house [a console] through which he can talk to his friendly local computer and get all the information he needs for his everyday life; his bank statements, his theater reservations…all the information you need in the course of living in a complex modern society,” says Clarke, predicting the PC.

Many authors have speculated about the Internet but Clarke had an uncanny knack for seeing how exactly it will be used by a regular netizen.

If you look at this quote from 1976, from the same MIT conference where he delivered his ideas about the web, Clarke predicted Google decades before anyone considered inventing the search engine or the concept of search results tailored for the users’ interest.

“You can call in through [a console] any information you want: airline flights, price of things at the supermarket, books you’ve always wanted to read…

News, selectively; you can tell the machine I’m interested in such and such items, sports, politics and so forth, and the machine will go to the main central library and bring all this to you, selectively – just what you want; not all the junk that you have to get when you buy the two or three pounds of wood pulp which is the daily newspaper.”

Even earlier than that, in his 1975 book Imperial Earth, Arthur C Clarke predicted targeted ads and the way web advertising will infringe on its users privacy.

“Yesterday I was going through a display of Persian carpets—antique, not replicated—wondering if I could possibly afford to take a small one back to Marissa. (I can’t.) This morning there was a message—addressed to me personally, correct room number—from a dealer in Tehran, offering his wares at very special rates. He’s probably quite legitimate, and may have some bargains—but how did he know? I thought Comsole circuits were totally private. But perhaps this doesn’t apply to some commercial services,” recounts a character from the Arthur C Clarke book Imperial Earth.

The eerily-accurate depiction of modern Internet ads, which are delivered automatically based on the user’s interests being data mined by advertisers, continues with another familiar view of how the web really works.

“Nor have I acknowledged some even more personal messages from various Sex Clubs. They were very explicit, and I’ve stored them as mementos for my old age. After the carpet episode, I was wondering if any would be tailored to my psych profile, which must be on record somewhere—that would have made me mad. But it was very broad-band stuff, and the artwork was beautiful. Perhaps when I’m not so busy…”

With how Google and Facebook track users across the web to better deliver ads or apps, sometimes even without their consent or without them having active accounts, this prediction is even more accurate.

The same Imperial Earth novel also debuted the device called Comsole, which looks a lot like a search engine. In the same paragraph, Clarke predicts not just the vast size of the web and how it will be organized, but also the impact it will have on users’ mind.

“All the libraries and museums that had ever existed could be funneled through this screen and the millions like it scattered over the face of Earth. Even the least sensitive of men could be overwhelmed by the thought that one could operate a Comsole for a thousand life-times–and barely sample the knowledge stored within the memory banks that lay triplicated in their widely separated caverns.”

Social media has documented side-effects, causing addiction, chemical imbalances in the brain and eventually depression, as users are exposed to endless amounts of inews, images and information deemed “necessary” for their professional or social life.

It took a worldwide pandemic to shift digital nomadism from a dream to an actual reality for millions of workers, but Arthur C Clarke’s remote work prediction became accurate in 2020.

He described in 1964 how “it will be possible for a man to conduct his business from Tahiti or Bali just as well as he could from London” and just a few years later completed that vision with a perfect depiction of remote work as it came to pass during the COVID-19 crisis.

“[Men] will no longer commute – they will communicate. They won’t have to travel for business any more, they’ll only travel for pleasure. I only hope that when that day comes, and the city is abolished, the whole world isn’t turned into one giant suburb,” he said.

Hands up if you spend your previous commute time now taking Zoom or Teams calls!

Perhaps it was due optimism, but Clarke didn’t go so far as to predict how half the world will spend its days wearing pajama bottoms and not being sure where their personal time ends and their workday begins.

Do you know of an author who predicted our current landscape?

Share your favorite futurist or relevant quote! It can be more ideas from the timeless Arthur C. Clarke, perhaps some observations from Asimov or even insights from a lesser known sci fi author – we’d love to see what the great minds thought today would look like.