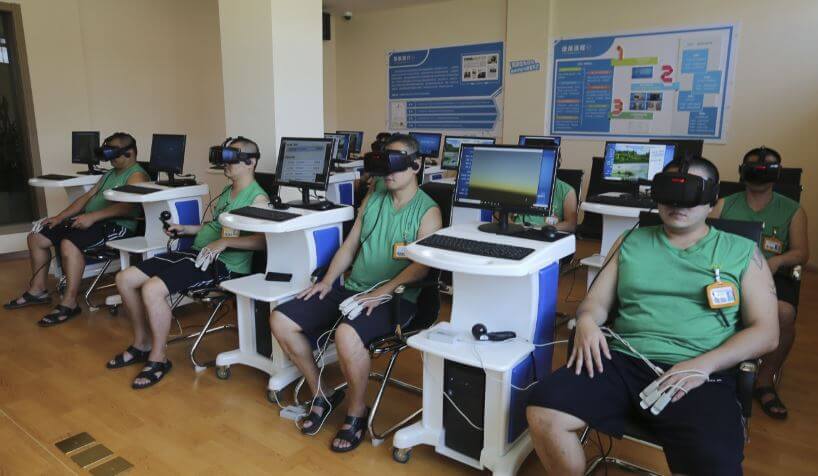 VR is not just an entertainment or educational experience but it’s also being applied in the world of therapy. A new pilot program in Shanghai is using VR headsets in order to monitor drug addicts in their recovery in multiple ways. Reading their tactics, you could be forgiven if your mind jumped straight to A Clockwork Orange.

According to this South China Morning Post report, addicts are fitted with VR headsets and shown “revolting images” of other addicts in order to eliminate the appeal of getting high. Using various sensors to monitor their physiological responses, addicts are also shown glamorous depictions of drugs use, while the doctors gauge their interest levels.

“The data reveals to his observers – including police officers who can see on the computer screen what Wu sees – the degree to which this stimulus excites him.

As the woman in this VR-enhanced scene holds her straw out to Wu, enticing him to drink with her and the man, Wu remains captivated for at least 10 seconds – a detail the observers note with interest.”

The patient in question is actually an inmate supervised both by doctors and law enforcement agents. What’s not exactly clear is to what extent the addict’s responses to VR therapy influence their chances of getting out of detainment early. As South China Morning Post explains, under mainland law, possession carries a sentence of 2 years in a rehab center.
Also read: ✍China and SK Turn Up Surveillance: Officers Wearing Facial Recognition Glasses And More✍
In any case, any attempt at curbing addiction in China is probably welcomed, since this report shows that China had 2.5 million drug users in 2017, 7% more than the year before. Even worse, more than 60% of them are synthetic drugs users, commonly choosing methamphetamine.
Also read: ✍Afraid of Heights? VR Therapy Could Soon Help✍