Survival horror games, in the true sense of the word, are few and far in between but Dead Space is a recognizable name in the genre. It launched in 2008 and instantly gained acclaim from not only gamers themselves but from critics too, and was overall a commercial success, which came as a little bit of a surprise.

But Dead Space 1 has it all: incredible atmosphere, spot-on sound effects, nightmarish creatures and many, many horrible ways to die.

Its 2011 sequel was just as popular, but, as is the case with too much of a good thing, the following game, Dead Space 3, was slammed by critics and gamers alike for shifting the focus from horror survival to pure action, and for pushing cooperative games and microtransactions.

We have seen a similar downfall for the Resident Evil games in the past, though the recent remake sold well, which proved that the interest for older franchises is still there and that loyal fans and new ones alike are ready to spend their money on them.

Gaming companies have notoriously avoided the genre  through the years, and Dead Space has had its own share of hurdles to go through before being green-lit.

Zach Wilson, former senior level designer for Visceral Games, who was in charge of Dead Space at the time, said that survival horror is hard, as a genre, to sell. Wilson stated in an interview that “horror games in general are expensive to make and hard to sell. People would give us the feedback that they love Dead Space but don’t buy it cause it’s too scary. Kind of works against itself.”

However, much like the Necromorphs present in the Dead Space franchise, the game is now rising from its grave: Electronic Arts has recently announced that it’s working on a remake of the game and I for one, as a huge Dead Space fan, am definitely here for it.

The announcement came alongside a short teaser trailer. Sadly, there wasn’t any gameplay included in it but we got a pretty good look at what the graphics engine is capable of and there’s one thing I can say for sure: that nightmarish mood is still alive and kicking.

If you’re new to the franchise, or if you were too young when the game launched to remember what this nightmare called Dead Space is about, it goes something like this.

In 2508, Earth’s resources have been depleted and, in order to survive, humanity has figured out that the best way to get those much-needed resources is to turn to what is known as planet cracking. This procedure draws resources from other planets in order to ensure the human race will survive.

Enter planet cracker ship Ishimura -the name that will hang above the Dead Space trilogy for the duration of the games. The ship sends out a distress signal, which is received by the USG Kellion where our hero, engineer Isaac Clarke, resides. 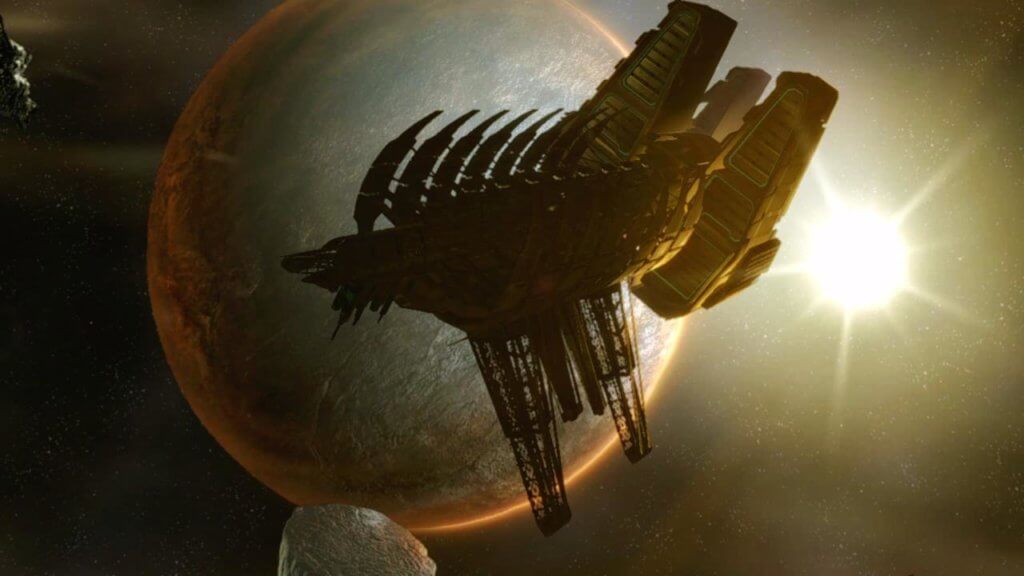 Isaac goes out to inspect the Ishimura, where he encounters the ship’s remaining crew, all of which have been transformed into Necromorphs – creatures that still carry the semblance of humans somewhat but have gained sharp teeth, claws and other extended appendages. In addition to that, they will hunt and kill anything that breathes. This change was instigated by mysterious objects known only as Markers.

From there on, you, as Isaac, have to make up your own weapons to fight off the Necromorphs, survive and solve the mystery as well as deal with an impending asteroid collision.

Also, as a welcome, you’ll find the following words scribbled on a wall on the Ishimura: cut off their limbs. Quite the welcome, isn’t it? 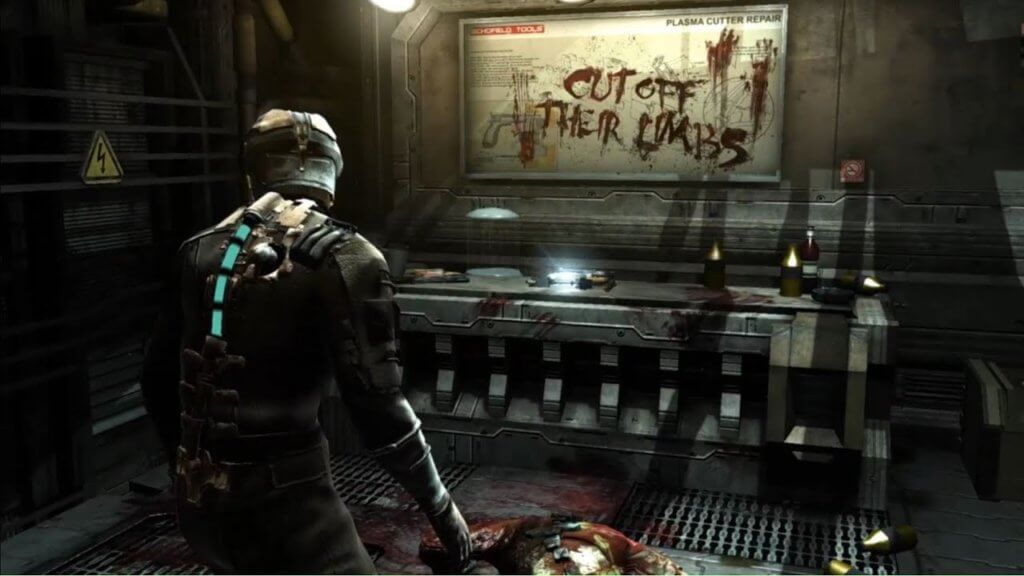 What Makes Dead Space So Special?

Dead Space was able to blend in a number of elements into one, gory package: you’ve got the horror but you’ve also got the Sci-Fi, a solid storyline and just the right amount of action to keep you going. All of these things were stirred in together in such a way as to compliment the horror genre, not steal the spotlight from it.

Space is already terrifying and there are plenty of scenes in the game that take advantage of this fear, ranging from fights in zero gravity and quiet spacewalks that are tinged with the tension of an incoming attack – sometimes it comes, sometimes it doesn’t. 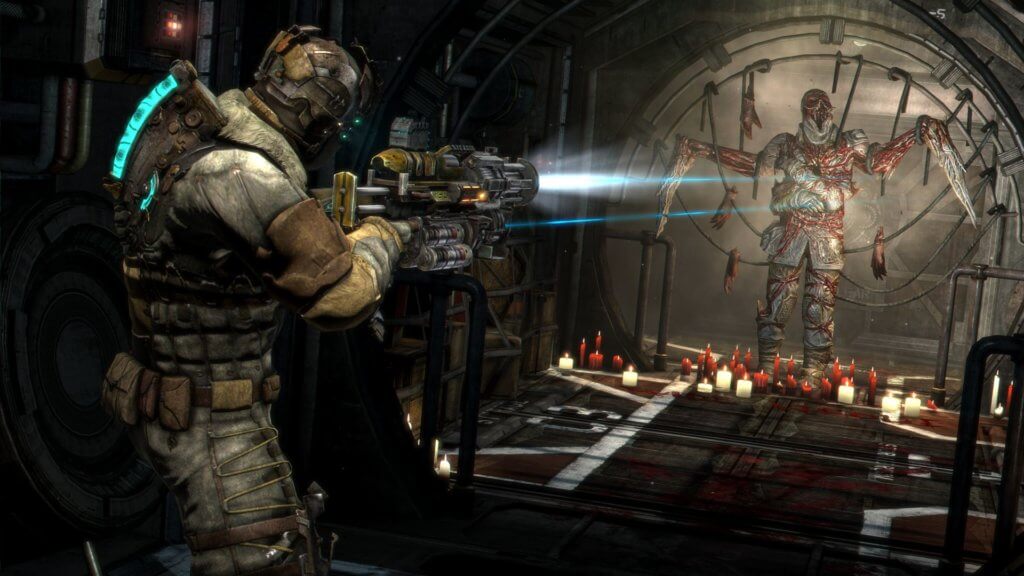 Of course, one of the most important parts of any horror piece of media are the villains or the monsters, and Dead Space does not lack in that department: the Necromorphs not only come with a wealth of lore that you learn about as you gather audio recordings from across the ship, but are, up to this day, quite recognizable thanks to their unique design. Body horror at its finest, we’d say.

It also brought around the iconic Plasma Cutter, which is one of the most recognizable and unique video game weapons.

Electronic Arts has revealed during EA Play 2021 that the game is now being “completely rebuilt from the ground up” and that it will be developed by Motive, who is responsible for popular releases like Star Wars Battlefront II and Star Wars: Squadrons.

“The Dead Space franchise made a huge impact on the survival horror genre when it was released 12 years ago, and I came to Motive as a fan first to specifically work on this game.” Philippe Ducharme, Senior Producer of Dead Space, has said. He added that “going back to the original and having the opportunity to do so on next-gen consoles excited everyone on the team. As we look to modernize the game, we’ve reached out to dedicated fans and invited them to provide us with feedback since the early stages of production to deliver the Dead Space game they want and for new players to enjoy as well.”

The game, while it will follow the original events and setting, considering it will be, as EA said, ‘rebuilt’ will most likely improve on the original story and we’ll definitely see better gameplay mechanics. The company is working with the Frostbite engine on reviving the game, so that’s pretty exciting.

It has also been recently revealed that Eric Baptizat, director of Valhalla and lead designer for Assassin’s Creed: Origins and Black Flag has been put in charge as the game’s director. Alongside him, we will see art director Mike Yazijan, who has worked on Dead Space 2 and Gary Stewart, a former BioWare level designer who worked on Mass Effect 2, 3 and Andromeda.

The rest of the remake Dev team that we know of so far is filled with names we’ve seen mentioned in games like the Star Wars series, Tomb Raider, Arkham Origins and Arkham Knight, just to name a few.

What We Want To See

Spend enough time running up and down the Ishimura and you’ll start to get a sense where the Necromorphs will be coming from – usually they would appear from inside vent panels once the player walked past a certain line. Their attacks were vicious but it was easy to learn how they would react, as they had a limited range of actions.

With the use of modern AI, these issues would disappear. Having more intelligent Necromorphs running around would definitely make the game scarier than ever before.

Bring Back The Horror

While the first two games embraced the horror, the third backtracked not only from allowing the ending of the second to flourish but also turned its focus on the action, becoming less scary. We want to get back that feeling we had when we woke up at the beginning of Dead Space 2 in a straitjacket, next to a room filled with Necromorphs (also dubbed as one of the most brutal opening scenes in a game ever).

The original Dead Space, unlike the third installment, had limited space in the inventory and forced the players to think on their feet a lot of times and it was one of the contributing factors to increasing tension – we’d definitely like to enjoy that feeling again.

When Is Dead Space Coming And On Which Gaming Platforms?

Unfortunately, there isn’t an official release date for the game just yet. According to EA, the remake is still in early development and will be released on the Xbox Series X/S, the PlayStation 5 and PC. This means that the developers will only be focusing on the modern consoles in terms of graphics.

We can expect to see a release sometime in 2022, but that’s just an optimistic guess and we’ll have to wait to hear more from EA before getting too excited.

Dead Space has been a game changer when it was released and we can see its influence in well-known titles like Alien: Isolation and indie game-favorite SOMA; all we can hope for is that the remake will revive an underrated genre and bring about a new era of survival horror games that will give them the recognition they deserve.