Five Apple Products That Were Total Failures in the '80s Back in the crazy ’80s, Apple had two failed systems, a portable, and some peripherals that hit the market and never made any noise as a result. Codenamed Pippin, the Apple ProFile was a bare Seagate ST-506 of 5 MB, in an enclosure, that sold at the time for no more than $3,499; around $10,000 in the current economy. The ProFile proposed a connection to a special interface-card that plugged into an Apple III.

After the launch of the Lisa Computer, the ProFile was sold with the new system. If initially, it was a barebone drive, the upgraded interface of the Lisa permitted the drive to connect to a built-in parallel port or an optional dual-port parallel interface card. This new iteration of the ProFile had much more space, offering at the time 10 MB of extra storage. That is around 8 Floppy drives worth of storage.

The problem with the ProFile was the fact that it was way ahead of its time. And the price tag never encouraged buyers to stack up on storage space. On the other hand, the product was on the market from 1981 to 1986 but never made it into the Macintosh or the Apple IIc computer lines. One notable detail about this external hard-drive is the fact that it also marked the first 5.25″ HDD that Seagate ever produced. Introduced in 1984, the Apple LCD Flat Panel Display was a 1-bit 7” LCD monochrome panel that offered an attachable screen for the Apple IIc. Offering 80 columns by 24 lines, the result was a display that stretched the appearance of any characters that it showed.

It was an expensive oddity and represented a new venture for the company. Reviews at the time never held the panel to any high regard, and the price didn’t help with early adopters. The LCD also lacked a backlight, which made the display hard to use in certain lighting conditions.

Other problems included some integration with the Apple IIc as a portable screen, not attaching securely, or being able to fold-over while the device is face down. Very poor contrast and no backlighting killed the $595 LCD pannel in a few short years. It was a good product idea, with terrible implementation. There is also the fact that an LCD panel was launched in 1985 when the fledgling tech was in its infancy. Storing data on tape cartridges in the ’80s was all the rage. Cheap, easily accessible, and most of all, depending on the format and connection, it proved that the tape could be an alternative to storing or transferring data. Apple took note of this trend, and in the late ’80s, launched the Tape Backup 40SC.

In essence, the product was an external SCSI-interfaced mini-cartridge tape drive that offered a way to store data on an industry-standard DC2000 QIC mini-cartridge. At the time, it offered a 38.5 Megabyte of raw data storage, with a transfer speed of 1.25 Megabytes and a block size of 8.192 bytes. Impressive for that period, mostly due to the SCSI-interface that was cutting edge at the time.

On paper, the concept seemed like the winning bet. A tape drive, with a considerable storage capability that takes industry-standard tapes! In theory, the 40SC was a dream come true.

In reality, it was bulky, expensive, and it only worked on a limited number of Apple machines. At launch, the 40SC had a price of $1,499 US and had a mass of 7.3 lb. It never produced the desired effect, and Apple discontinued the product in 1994. IF the IBM PC was the market leader, the Macs proved to be good at other tasks, especially for designing magazine layouts. This was due to the WYSIWYG philosophy that stood for “what you see is what you get.” This approach let users see the result before print, and helped magazines improve productivity at the time.

The Macintosh Portrait Display was one of the best Apple displays of its time and sported an awkward resolution of 640 by 870 pixels at a pixel density of 80 dots per inch. It was ideal for print work yet had some drawbacks, that Apple also noted in the manual.

Called environmental influences, Apple said that color and display problems could be encountered if the display was sitting on metal desks, file cabinets, or bookshelves. You know – stuff that you find in an office. The Cupertino giant said: “These objects cause dynamic raster distortion — that is, movement or jitter of the image,”

With this small problem, and the limited use of the unit, the fact that it was a 15-inch vertical grayscale monitor, the $1,099 monitor (plus $599 for an additional video card to run it) was a quirky experiment that should have never happened. 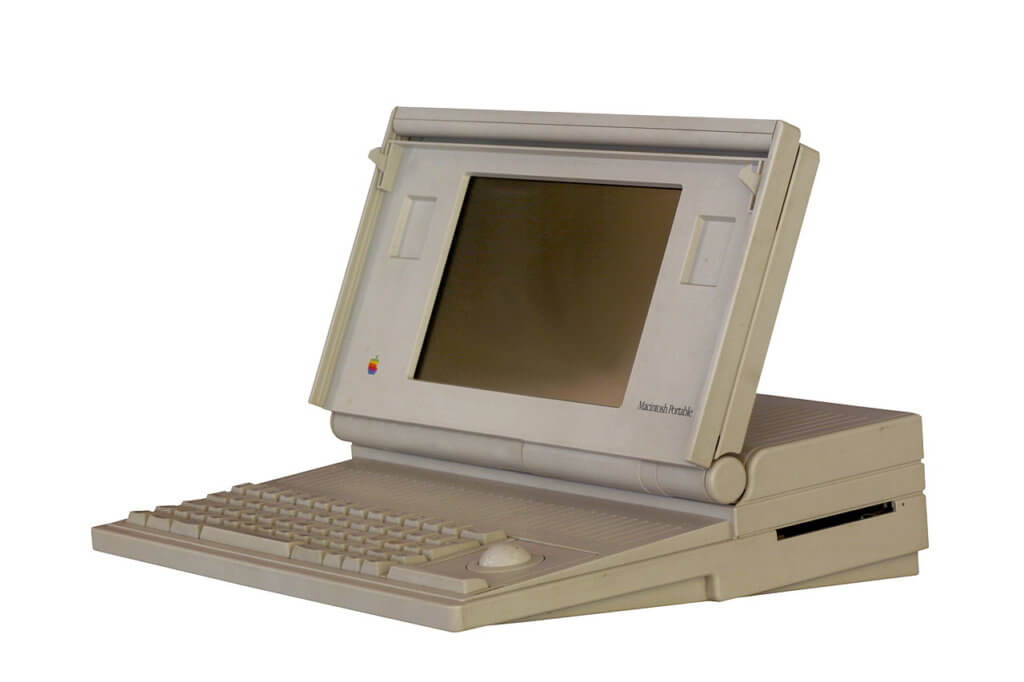 Marking the first battery-powered Macintosh, the first Apple Portable featured a black and white active matrix LCD screen, a
16 MHz CPU, 1 MB SRAM, 256 KB ROM, and 1-bit 640 x 400 graphics. A portable beast, for the time, that was praised by critics, but with a hefty price tag: $7,300 US. For something that pretended to be Portable, but had a mass of 16 pounds, and did horribly in low light, the first Apple Portable was a thick and heavy, not to mention all the expensive parts that it needed to run.

With all the problems mentioned above, Apple introduced several changes to the portable, addressing economic issues, a new screen, new SRAM memories, which reduced the total RAM expansion up to 8 MB and lowered the price tag. With all these changes, the Portable never made it passed 1991, and never made the impact that Apple wanted it to do.

It was too expensive, too bold, too soon, too much for the hardware of the era to handle. Now, Apple is a world-respected manufacturer. But that spot is not guaranteed; to reach the top, a company has to make mistakes and learn from them, for us, the public, to enjoy a well-built product. Mistakes were made. But they learned from them and look at them now… in 2020.