HiSense Making A New Dual-Screen Phone: One Side AMOLED, One Side E-Ink, Now with A Notch 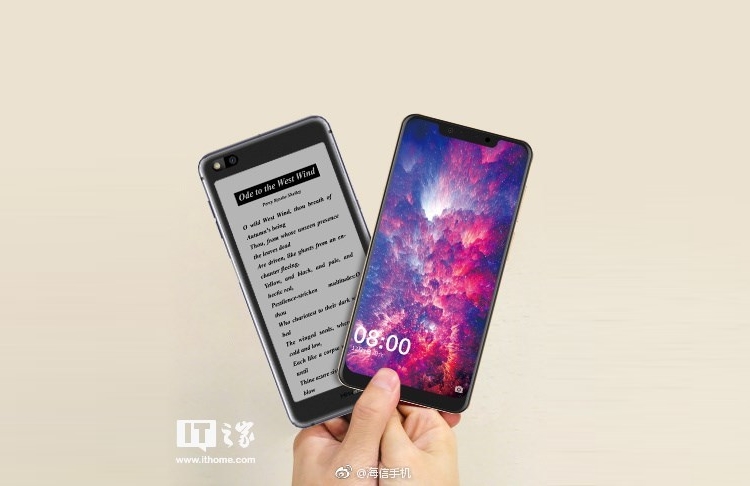 Back at IFA 2018, visitors to the Hisense booth saw three new high-end TVs, one of them featuring a 4K Quantum Dot Display, but also a nice surprise.

It was, of course, the Hisense A6, an ambitious smartphone featuring not one, but two screens. The design of it was not foldable, but, instead, Hisense chose to place one screen on the front and one screen on the back of the device. The main one was a 6.01-inch AMOLED display with FHD+ resolution. On the back, Hisense 6 unexpectedly featured a 5.61-inch HD+ e-Ink display (think Kindle) for reading without eye strain.

Now, Hisense is preparing a new model with the same dual-screen approach but with a few more 2018-ready perks. Teased on Weibo, the new Hisense dual-screen smartphone looks pretty cool and will officially launch next week. Could it be called Hisense 6 Pro or something similar? Yes, based on the image above that was spotted by IT Home.

The main display will now stretch to the top and feature a notch in order to give up the top bezel. However, don’t expect a dual camera in that notch, as, you can see, there’s just one.

The image also doesn’t present any 3.5 mm jack, which was absent in the previous device as well, nor does it show a fingerprint scanner. We expect to see that on the side, just like on the Hisense 6. Fortunately, we won’t have to wait long for the official announcement and more specs.