We first heard rumors about Huawei’s upcoming foldable device when the term ‘Mate V’ was initially registered but other than that, there have not been a lot of rumors or leaks regarding this device.

However, we do have one thing happening: the company has now registered a patent that describes a ‘heat pipe’ that features a ‘collapsible part’.

While the patent doesn’t mention what device this system will appear on, it’s widely agreed that it will be featured on Huawei’s upcoming foldable device.

The patent has 46 pages and is mostly filled with technical descriptions but we can say that it describes a new component that functions in the same way the long, flat copper tubes that run through most of our modern smartphones do. 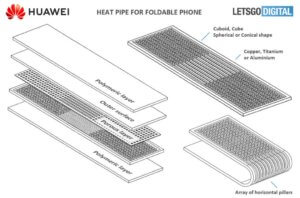 The difference between your usual pipes and tubes and this one is that it is made up of a stack of thin, flexible pillars that can conform and move along with the hinge of the device.

This foldable- ready-to-use connection connects two racks of what looks like tiny spheres, which run along both of the inflexible halves of the smartphone shell. They can be made out of titanium, aluminum or copper, and can help dissipate heat within the device when needed.

Huawei also specified that this new type of heat pipe can be sandwiched in polymer layers, alongside other materials, to complement the thermal management system.

Other than that, the patent doesn’t reveal much else, however, it does show us that Huawei doesn’t plan to stop manufacturing foldable devices and is working on improving them with each new release.

The Huawei Mate V doesn’t seem to be following the same foldable design as its other Mate predecessors as the company is said to be focusing on a clamshell design instead, following in the footsteps of Samsung’s Galaxy Z Flip 3 and the Motorola Razr. 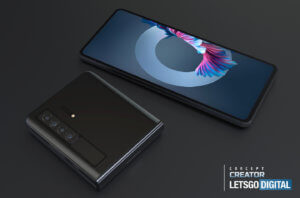 But that remains to be seen when the time comes, which might be sooner than expected: recently, a leaked teaser from Huawei showing a closed flip phone made an appearance on Weibo. 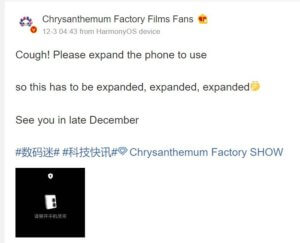 In the post, a late December announcement was also teased, so who knows what surprises Huawei has in store for us? We’ll keep our eyes peeled for any leaks in the coming days.