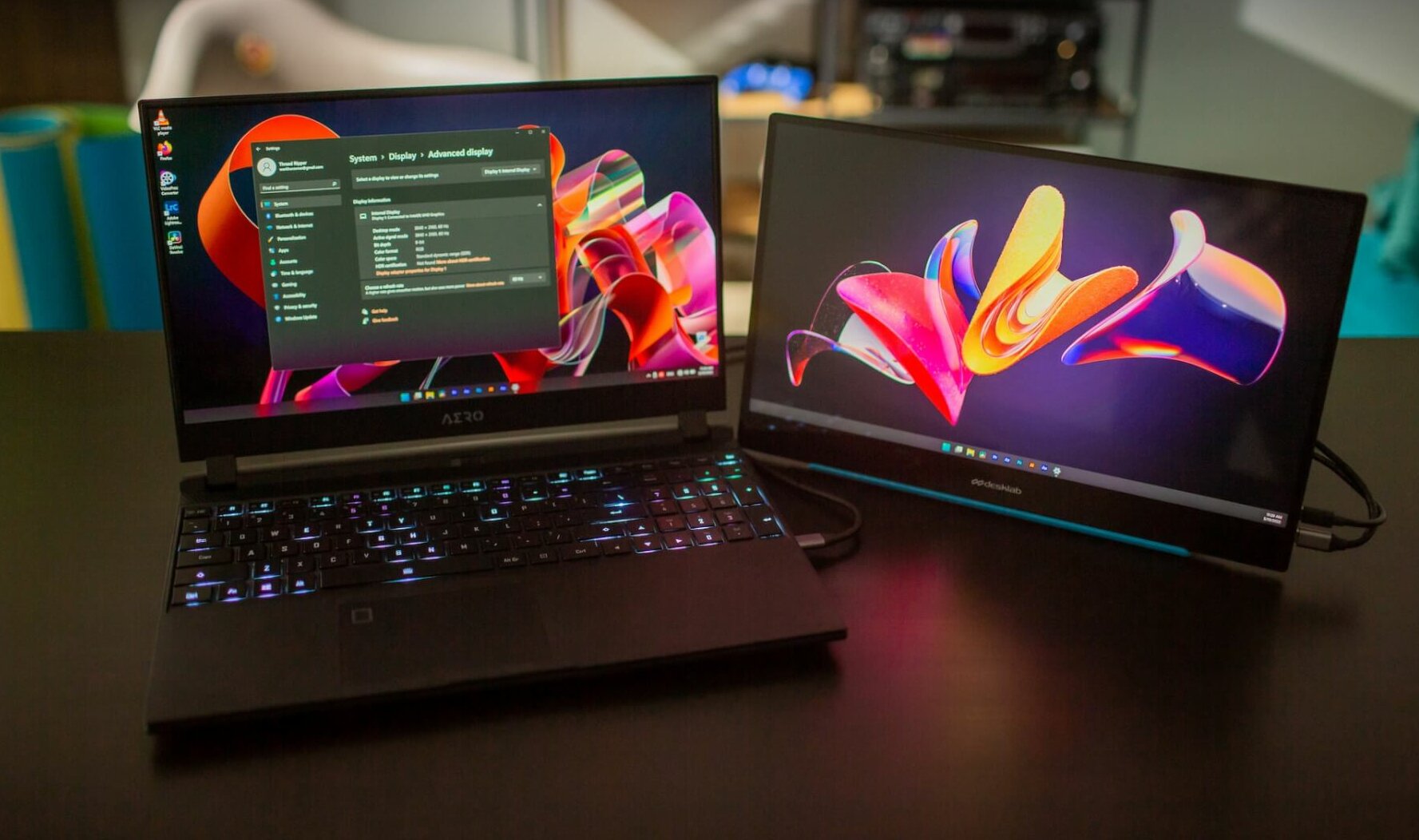 Is Desklab truly a portable monitor or not? Can you actually use it as a professional on the road or is it a better fit for daily usage, when you have to contend with a tiny desk? Let’s answer these questions in the review below and see some specs for one of the most beautiful and light portable monitors we got our hands on so far.

The Desklab monitor looks really nice, it is 0.23-inch thin and weighs 1.3 lbs and you can immediately tell that it’s made of quality materials.

When it comes to connectivity, it has two USB-C ports, one Micro USB, a mini HDMI one and a 3.5 mm jack. You can connect it to you Mac or PC and extend your ports or even charge your other devices by connecting them to the Desklab monitor.

It comes with an AC/DC Adapter out of the box that outputs 5V,  6A, 30W, a USB-C cable and a mini HDMI to HDMI cable.

The magnetic stand you’ll see advertised on the Desklab Monitor website was not included in our package. If you want one, you can get it for $50 from there.

Desklab says their device has universal compatibility so we’ve tried it with multiple devices to see what works best for a regular or a professional user.

First, we gave it a go with a Nintendo Switch for a co-op gaming session away from home. The experience was as one would expect: the screen size was good enough for two players, we enjoyed the brilliant colours and good sound offered.

All in all, it was definitely a better experience than on the 7-inch Switch screen.

Desklab Monitor and an Android Phone

Staying on the gaming side of things, the second device we put to the test was an Android phone (the Asus ROG Phone 2).

This time around we had to see if the touch was responsive enough and how would it be to use it as a 15-inch display / tablet. Of course, mobile gaming on a huge tablet was not ideal. It was fun for a while, but overall we feel that this device is better used with a stand and connected to a different device.

The touch itself felt weird while playing; your fingers don’t slide as smoothly as they would on a smartphone, as the screen coat is pretty rigid and you get too much grip.

Desklab Monitor and a Gaming PC

PC gaming with Desklab? Yes, that’s definitely a possibility! Connected to a gaming laptop and used as a secondary screen is another great scenario, especially since this time around we didn’t need to touch it, just to watch it.

Since we wanted to see it in action while playing, we also tried it as a secondary display for our Windows PC. Windows 11 has full touch compatibility and this time we found that extremely useful.

Let’s see how it performed in CS:GO, compared to other gaming monitors:

Switching tabs, browsing through comments on videos or even through our files felt good. If you’re a daily Windows, then having the ability to use it as a touchscreen is something you want to do.

Also, compared to other portable displays we’ve used so far, the Desklab monitor as a secondary screen for video editing or photo editing was perfect since we could output up to 4K resolution.

We also wanted to see if this monitor could replace a graphic tablet or a regular tablet and extend the power of Adobe Photoshop and Illustrator by giving us the ability to draw on the screen.

Artists might have more patience than we do though since this did not work as we hoped it would. Yes, it could probably be used for sketches as Desklab advertise it, but it is not a Wacom replacement by any means.

In other words, if you’re an artist and already spent the money on it, that’s fine but we wouldn’t recommend for this use case.

Obviously, we tried the monitor as a secondary display for an iPad Pro and a MacBook Pro. These two don’t have touch support for external devices, but at least you could use it as a 15” secondary display with beautiful colours and 4K resolution, connected directly to an USB-C port without needing to carry the monitor’s power brick with you.

The settings and controls on the device are limited and there’s not much you can do on this matter. However, you don’t actually need to a lot of extra controls as the default average delta-e is very good.

The last device we tested the Desklab monitor with was a Chromebook. With full touch support and 4K resolution, this time it was able to enhance my son’s school computer and charge the Chromebook in the same time.

Conclusion: Is It a Good Deal?

So, can you use the Desklab 4K touch monitor as a portable monitor?

Yes, you can definitely use it while traveling. It’s great for video editing or short gaming sessions when you want to play on a bigger display. It’s ideal actually when you want to have some fun while using a Switch or some other casual console.

We have to say this though: if you are a gamer used to high refresh rates, then this is probably not for you.

Also, keep in mind that the lack of battery makes it less portable than other monitors out there.

Thanks to its 4K, IPS display, it’s perfect as a second monitor for productivity and professional use for a PC or Mac.

Gotta say, at this price point ($399), this is one of the best monitors I’ve used at my tiny home desk.

If you’re looking for a portable monitor, I hope this review helped you and if you have any other questions don’t hesitate to ask them in the comments section below!