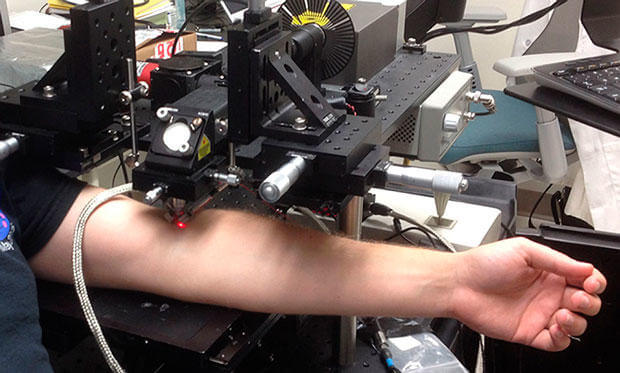 Developing a cure for cancer or tools that can help us stop it before it begins to grow has been the holy grail of modern medicine for quite some time now. Numerous methods are currently undergoing tests all over the world and a new one is yet again giving hope to cancer patients.

A study led by Vladimir Zharov, director of the nanomedicine center at the University of Arkansas for Medical Sciences revealed that a new laser treatment can find and kill the tumor cells that circulate in the blood stream of patients with melanoma.

The laser system also managed to detect the tumor cells 27 times out of 28, with a sensitivity 1,000 times better than any of the other technology we currently have available.

The laser sends energy to the bloodstream and creates heat, which, in turn, creates sound waves which are recorded by an ultrasound transducer that is placed over the skin next to the laser. The sounds indicate when a cancer cell passes through the bloodstream.

The same laser is then used to destroy these cells in real time, via the heat which causes vapor bubbles to form on the cells. The bubbles continue to expand until they collapse and mechanically destroy the cell.

The device also has another advantage over other technologies: it can scan a liter of blood in just one hour, without that blood ever having to leave the patient’s body.

Detecting the cancer is in itself is a big deal but the laser was capable of killing a good number of the cancerous cells in real time, as the cells traveled through the patient’s bloodstream, which is an amazing feat.

Metastasis (the spreading of cancer) is the major cause of death in cancer patients. The illness spreads when cells from major tumors start to break off and travel through the bloodstream into new areas of the body and begin forming other tumors. By killing the stray cells before they have a chance to set anywhere else in the body, the laser tool could truly save many lives.

This means that it could be used as a thorough and non-invasive procedure to hunt and destroy the cancer cells before they cause any more damage.

In one patient, the device managed to destroy 96% of the tumor cells the laser beam came across.

The researchers are currently working on expanding the technology so it will be able to detect and kill other cancer cells, not just the ones responsible for skin cancer.