Need Something? Built it - Teenager Makes His Own Prosthetic Arm Out of Lego Pieces 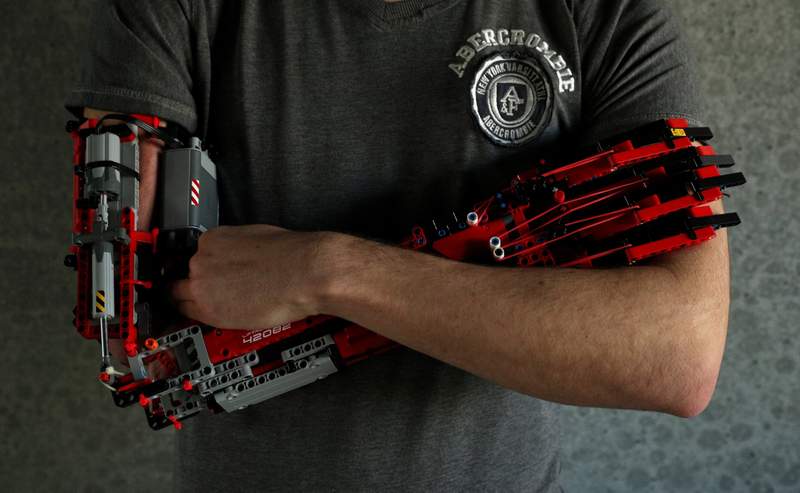 Need something? Build it!

David Aguilar, only 19, was born without a right forearm due to a rare genetic condition. That didn’t stop him from attending
the Universitat Internacional de Catalunya, in Spain, to specialize in bioengineering.

It also didn’t affect his positive outlook on life; on the contrary, it only made him try harder. In need of an affordable prosthetic, Aguilar decided to build himself an arm out of materials readily available around the house: Lego blocks.

He built four of them, actually, all of which have contributed to the one Aguilar is currently using.

“As a child I was very nervous to be in front of other guys, because I was different,” he said “but that didn’t stop me believing in my dreams. I wanted to… see myself in the mirror like I see other guys, with two hands.”

Legos were Aguilar’s favorite toys growing up so he chose the colorful blocks as the most affordable material he could work with. He built his first prosthetic at 18 – the arm could bend at the elbow and flex as well. He dubbed it MK, the same name Iron Man’s first suit had, which Tony Stark usually calls Mark I.

Aguilar’s latest arm is bright red and is called MK IV, keeping in tune with the Iron Man-inspired theme.

The creative student hopes that, after he graduates, he will be able to build affordable prosthetics for those who need them, even considering giving them away for free.