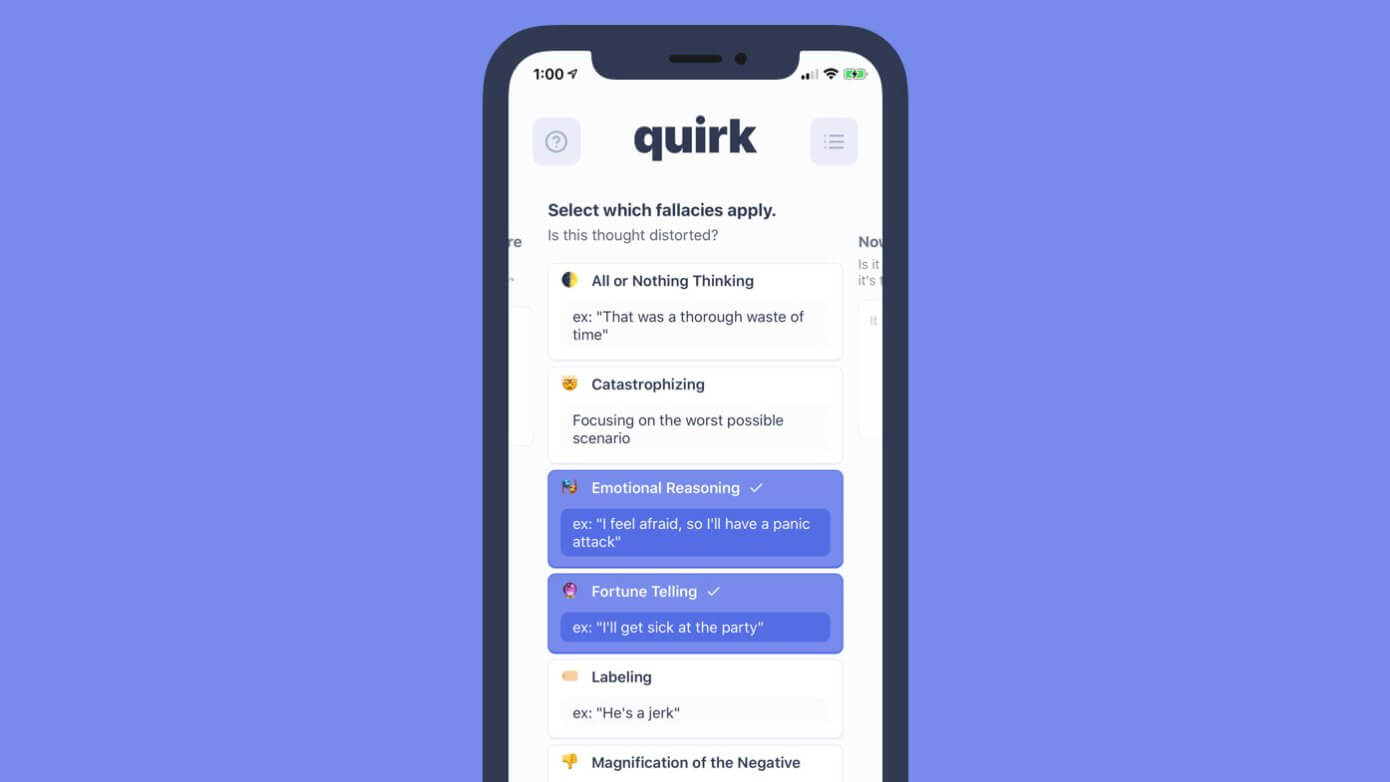 YC-backed company Quirk aims to bring cognitive-behavioral therapy (CBT) to people struggling with anxiety or depression and also raise awareness in the process.

“CBT is effective in changing harmful behavior by transforming the way people think, and therefore, stopping them for repeating the same patterns. CBT has 40 years of research behind it,” says CEO and founder Evan Conrad. “I’ve had severe panic attacks my whole life and saw different therapists who tried what I now know is CBT. I assumed it was pseudoscience. It wasn’t until 10 months ago that I re-discovered CBT on my own and learned about its efficacy. It’s the gold standard.”

On that note, the app gives users support to users to practice one of the most common exercises in CBT.

Basically, it works like this:
Whenever feeling down or anxious, users launch the app to record it. There, they identify distortions that apply to those thoughts, such as Catastrophizing, Magnification of the Negative, Fortune Telling, or Over-Generalization, among others.
From there, they can think of reasons why that thought might be illogical to begin with and replace it with something more reasonable.

CBT hopes to identify thought distortions, and manually replace those with beliefs grounded in reality.
The problem that Quirk is trying to solve involves two parts. First, people may not be aware of the benefits of empirical data supporting CBT. The second of is that the process of manually writing this on paper can feel less private out in a public space and the notes can be easily lost.

By making CBT accessible to more people and turning the process of doing CBT into a more private one, Quirk would solve these problems.

“As for self-administered CBT, we’ve run this by a number of therapists and all of them have said it’s generally a net-benefit,” Conrad said via email.“What would be harmful is if someone with a severe condition decided that they should use Quirk instead of seeing a therapist. But in practice we’ve seen the opposite effect. People who would have otherwise done nothing about their condition use Quirk as a ‘first step’ towards therapy or will use Quirk when they would otherwise have no option (either because there isn’t a treatment in their country/area or because they can’t afford it).”

According to Dr. Daniel J. Fridberg, a practicing CBT psychologist from the University of Chicago, the triple-column technique is a very good CBT practice but is not everything the package of Cognitive Behavioral Therapy has to offer.

“CBT is an effective, time-limited, reasonably cost-effective psychotherapy for things like depression, anxiety, substance abuse, etc,” said Dr. Fridberg. “The problem is that finding a good CBT therapist who delivers evidence-based treatment isn’t always easy in smaller communities where there isn’t easy access to a research hub. In some respects, an app that is packaged in an attractive way gets people’s attention and promotes CBT as effective is a good thing.”

Ultimately, Conrad hopes Quirk can make a difference and offer support for people suffering from anxiety and depression, and also to encourage them to seek professional help in association with using the app. Quirk can be accessed for $4/month.