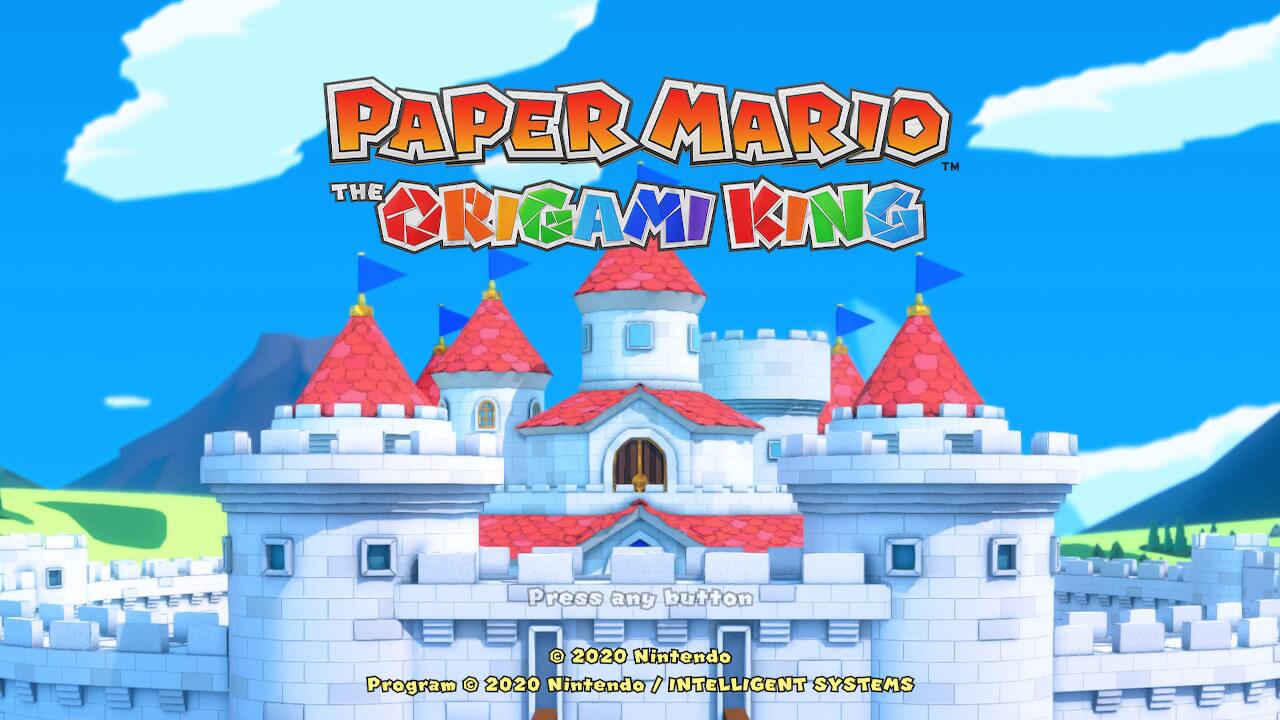 Without a doubt, Paper Mario is one of the more controversial Nintendo series. Players of the early games – Paper Mario and Paper Mario: The Thousand-Year Door – often cite the later installations as missing the crucial RPG mechanics that made these early games so unique. Supporters of the newer games – Super Paper Mario, Paper Mario: Sticker Star, and Paper Mario: Color Splash – claim that even without these elements, the loveable worlds and humor as well as unique-to-Mario gameplay make each game stand on its own merit.

So where does Paper Mario: The Origami King stand in this lineage of games and division of fan opinion? Realistically, its neither a return to the game’s original RPG format nor is it simply a departure. In truth, it probably lies somewhere in the middle: a game that tries to keep close to its roots while experimenting with new gameplay elements (for better or for worse). 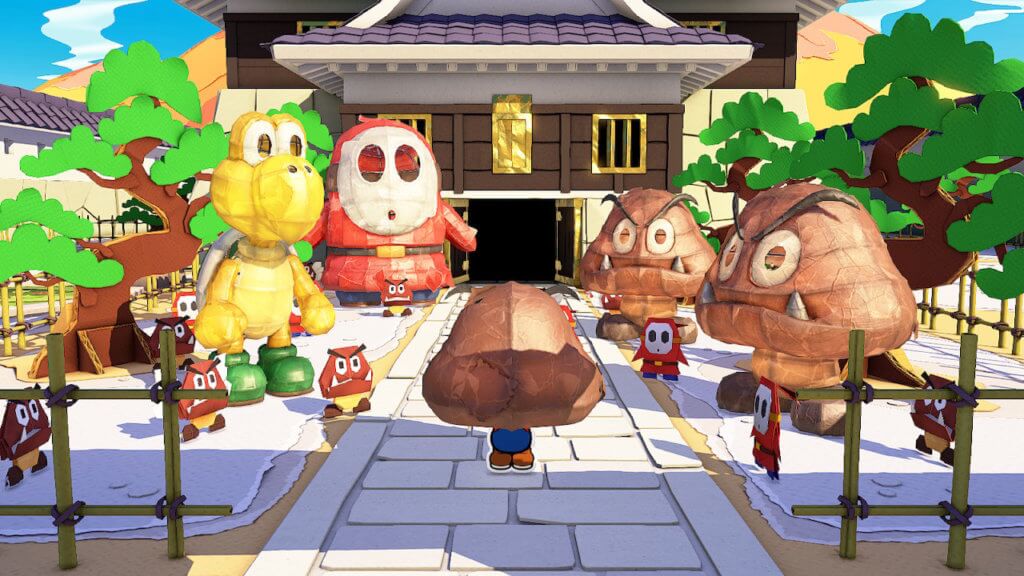 The development team really dedicated themselves to the paper and origami themes.

Paper Mario: The Origami King is set in an origami-fied Mushroom Kingdom. Lead by Origami King Olly, all residents of the Mushroom Kingdom are being folded and incorporated into his Origami Army. Mario, with assistance from his sister Olivia, set out to restore Princess Peach and the entire kingdom from their folded fate.

Much like the last couple games, The Origami King’s aesthetic leans heavily on this paper related theme. In fact, the gorgeous paper and origami visuals provide a bright and playful ambiance to the world. Everything is committed to this theme; even some of the enemies are paper mâché!

Perhaps more so than in recent games, this charm can be felt intensely through the game’s supporting cast of characters. The Toads certainly retain their characteristic humor and personality as each has their own witty line whenever they are found. Overworld characters, like an auctioneer Monty Mole and the Koopas and their religious cult, also exude charms and fill out the world with really interesting characters. 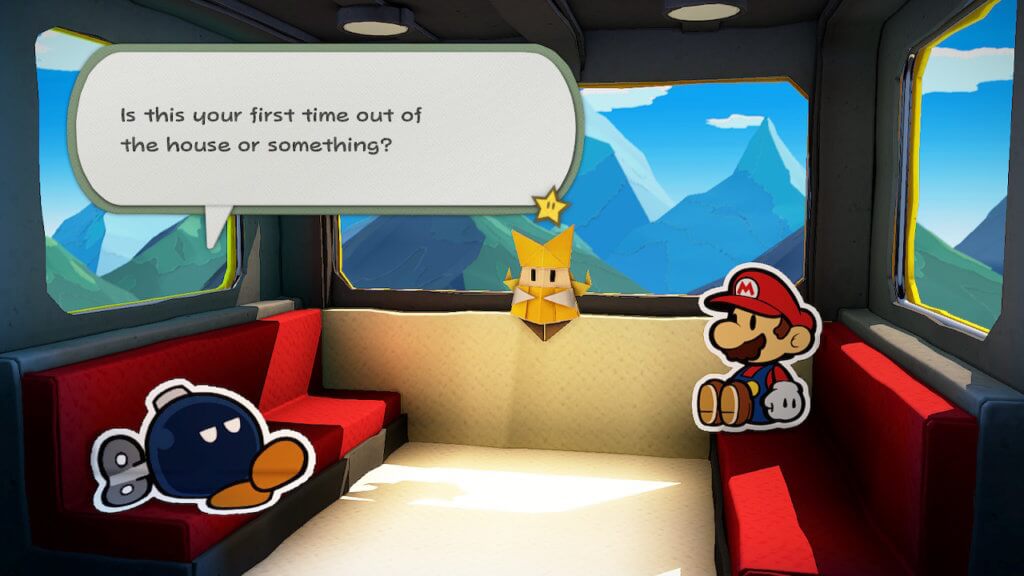 Strange to say, but Bobby the Bob-omb might have been the star of the game.

Perhaps the most memorable companion, though, is Bobby. Bobby is a Bob-omb who has amnesia. Throughout your journey with him, his off-putting nonchalance slowly turns into affection as he finds himself in lost in funny and absurd situations. After Olivia becomes trapped under a rock, Bobby regains his memory. He remembers the life purpose of a Bob-omb is to explode, sacrificing himself in order to get the rock off from Olivia. The fact that this is one of the most memorable moments of the game really points to just how relatable and charming the characters are.

If the aesthetics and characterization are as stunning as the best of the Paper Mario series, its gameplay and battle mechanics felt like some of the series’ worst. The overworld consists of origami enemies, hidden Toads, and some platforming puzzles. The platforming challenges aren’t different and often consist of waiting around for platforms to move in the proper place. In other cases, the challenge is finding the specific place to hit your hammer in order to move forward. Hidden Toads are nice but the rewards for finding them (other than a witty line) are paltry at best. Then there are the origami enemies, which brings us into combat. 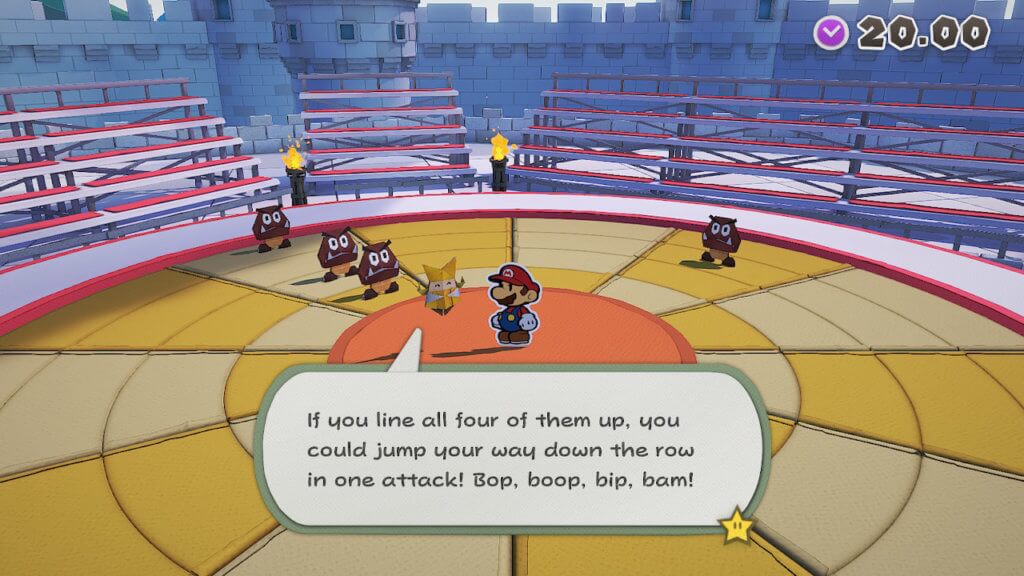 Combat in the game uses four concentric circles with Mario in the center. Enemies are placed in one of the rings and you have to line them up in specific ways to attack them. Succeeding in lining them up results in an attack bonus while failure often leads to a second round. Boss battles operate in reverse, with the boss in the center and Mario using panels to launch attacks.

At first, these puzzles were an interesting take on battling for a Mario game. Soon, they became tedious. The main issue with the battles is that all they give are coins. Coins don’t do much for the character other than buying accessories but required battles provide enough coins for your adventure. Additionally, even the simplest battles take an exorbitant amount of time what with the loading screens, rearranging of the concentric circles, and the battle and win animations. 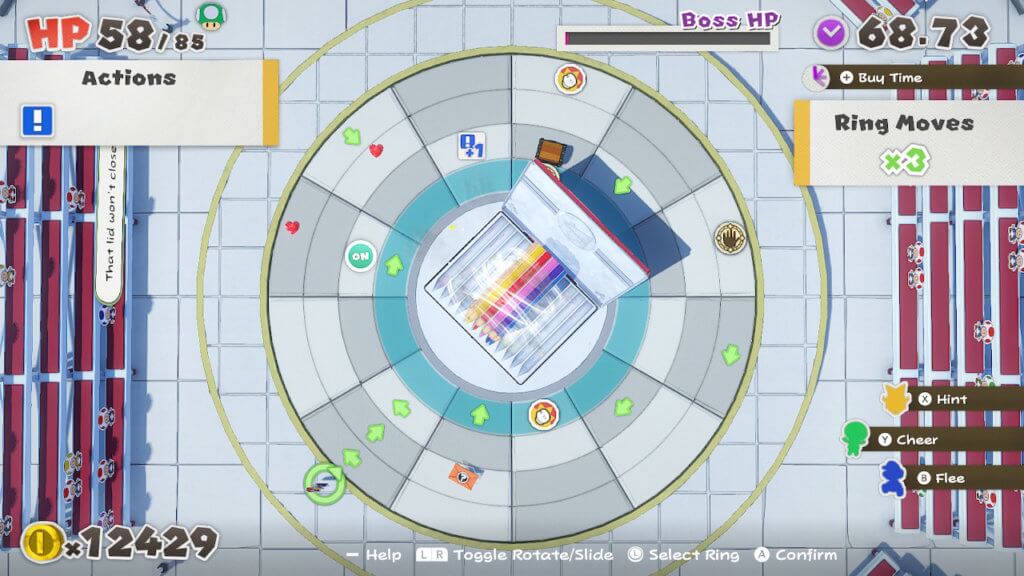 Boss battles use the same concentric ring mechanics, but flip how you approach the battle.

Without some of the early game’s RPG mechanics (experience points and leveling), the battles unfortunately have almost no purpose. For the most part, it’s actually more beneficial to avoid battles altogether. While impossible because of required boss and mini battles, it is truly unfortunate that a core element of the game is something to be avoided.

The battle mechanics highlight most prominently the incredibly creativity but limited follow through of the recent Paper Mario games. Indeed, although the battling is incredibly unique and has the promise of being something extremely fun, it ends up becoming tedious and overdone. After the first couple battles, there are no incentives to enter into these encounters and actually many reasons not to. 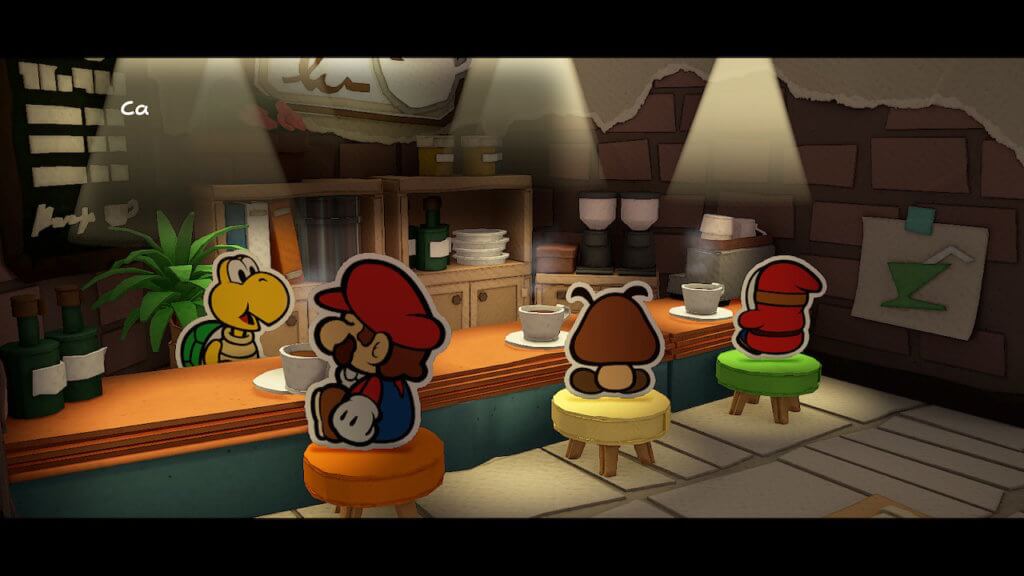 One thing’s for sure: Paper Mario exudes character and charm.

All in all, Paper Mario: The Origami King seems to be a harbinger of things to come for the series. That is, it’ll be a game full of heart, personality, wit and beautifully designed worlds. At the same time, Paper Mario may have truly left behind the core RPG elements that made the original games so critically acclaimed. And although Paper Mario may never again be a true RPG with experience, skills and new-to-the-franchise characters, The Origami King shows there is still space for these games within your gaming library.