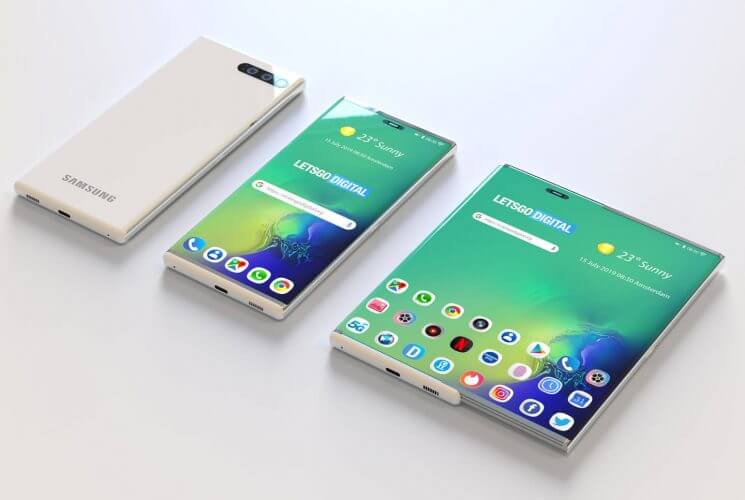 Samsung has found itself in pretty hot waters lately: after the Galaxy Fold fiasco, which saw review units with bent screens and other display issues, the company also got slammed with a lawsuit in Australia that accused it of ‘falsely advertising’ the Galaxy phone’s water resistance rating.

Samsung stated that it will be defending its phone against the accusations while, on the other side of the ocean, Samsung’s CEO admitted that he had ‘missed something’ when it came to the Galaxy Fold and that, at the time it was launched, the phone had not been thoroughly tested.

But there was another idea that could have, perhaps, saved the smartphone from its fate.

Samsung had filed sometime at the end of 2018 with the KIPO (Korean Intellectual Property Office) but it only received approval at the end of May and was subsequently made public on the 24th of June 2019. This particular patent showcases a different approach to the foldable model, which allows the phone to extend its width by 50% via a slider mechanism.

The patent was found by LetsGoDigital, who took it upon themselves to create a few renders that show how the device might look like if the project would come to fruition.

The file shows that one side of the screen would be stored inside the body of the main screen and the users have the choice to slide it out in order to enlarge it if they want to. However, the screen can only be slid to the right, which means that the other screen will be hosted inside the main screen’s housing, at least as far as we can tell.

Unfortunately, the patent does not detail exactly how the slider mechanism works and how the screens seem to be blending in together to form just one, unified display.

The phone features a punch hole camera system in the middle while the rear camera is hosted at the top right corner, which makes sense, considering the extendable screen. Of course, as it’s just a patent, we have no information on how many camera lenses it will feature.

The patent doesn’t mention anything about a 3.5mm headphone jack but the images that come with it do show an USB-C at the bottom, next to a speaker grille.

Creating this sort of a foldable phone might cost Samsung less than manufacturing the Galaxy Fold but if the company will decide to go for it in spite of its previous mishap, that remains to be seen.