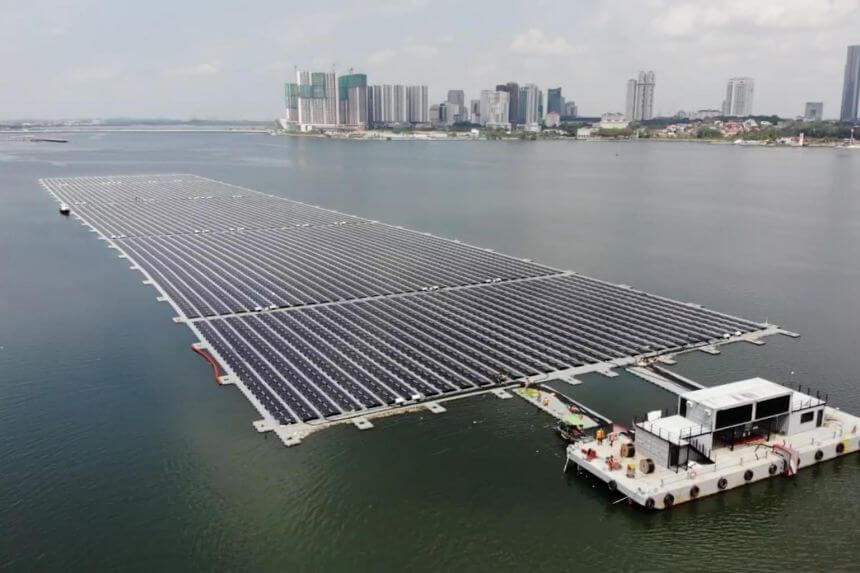 Despite being relatively small as far as countries are concerned, the island of Singapore has a big emissions problem. It contributes around 0.1% of global emissions and ranks 126th out of a total of 142 countries in terms of CO2 emissions per dollar GDP, based on International Energy Agency (IEA) data.

As a very small, heavily urbanized, the island city, Singapore had few options where to house the solar panels

So instead, it found an unusual, but highly efficient solution. The city-state turned to water in order to build one of the world’s largest floating solar farms, capable of offsetting more than 4.000 tonnes of carbon dioxide per year and thus bringing the country a step closer to decarbonization.

It took one year for sustainable energy provider Sunseap Group to set up the solar farm in the Strait of Johor, which separates Singapore from Malaysia, and that taking into account the restrictions and lockdowns brought by the Covid-19 pandemic. The farm has a total of over 13.000 panels, and more than 30.000 floats, which cover an area the size of seven football fields. The panels are anchored to the seabed and can produce 5 megawatts of electricity which is enough to power approximately 1.400 apartments per year, while the floating system can withstand most weather conditions and keep the platform as well as the equipment steady.

“This is an important milestone for Sunseap as we believe that offshore space like the sea, reservoirs, lakes… offers exciting opportunities for land-scarce and densely populated cities to tap solar energy,” co-founder and CEO of Sunseap Group Frank Phuan stated. “They are places that are unobscured from the sun and with low risks of vandalism or theft.”

Singapore has long since achieved “grid parity” as far as large-scale solar power is concerned.

That means that ever since 2013 solar electricity generation has the same cost – or even less – as power from the electricity grid. However, despite the project being more difficult to accomplish when compared to land or rooftop installations, the current design and use of solar power remain a promising design. Minister for Trade and Industry Chan Chun Sing said in 2020 at the Institute of Policy Studies Perspectives conference that Singapore is looking at a post-fossil fuel future and sees commercially strong prospects for the solar-powered industry in Singapore.