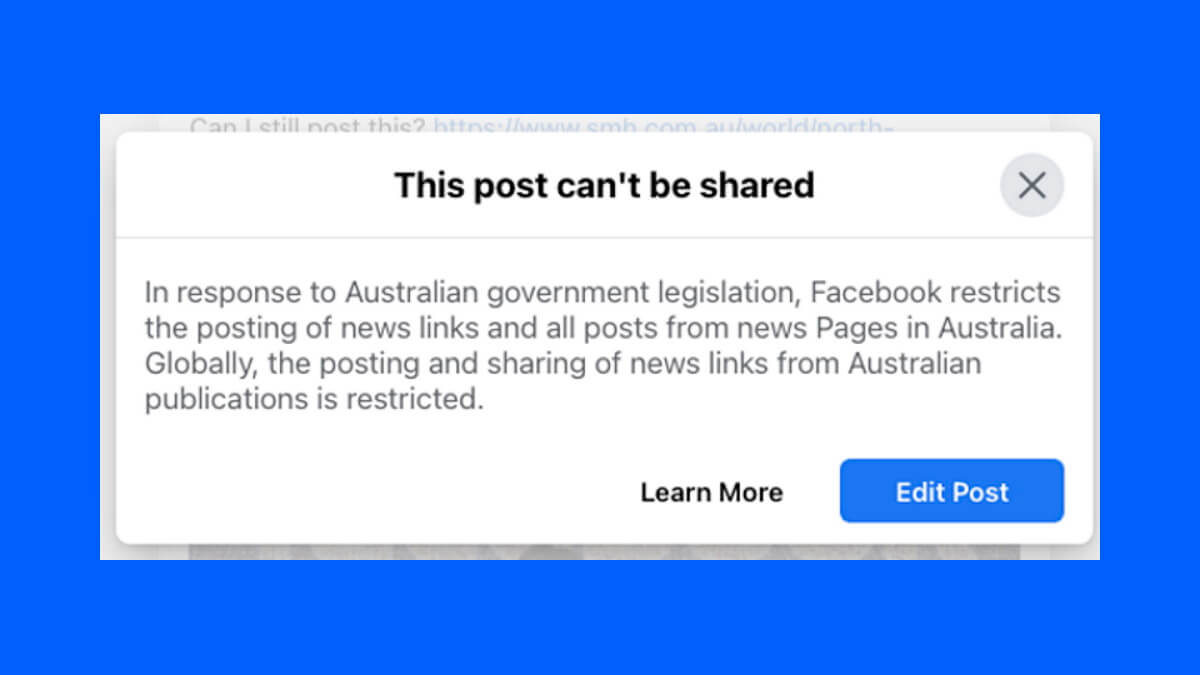 One of the biggest, most controversial Facebook actions happened last February, when it banned Australian news sources in protest of a proposed law that would have Facebook pay news publishers when using their content.

Now, a WSJ report quotes whistleblowers as saying that Facebook’s Australia ban was not a form of protest but a deliberate way to strongarm Australian authorities into toeing the line ahead of the vote.

On February 18th, 2021, after the House of Representatives passed a first draft of the bill, Facebook started banning Australian pages en-masse in anticipation of the final votes that were to be held by the Australian Senate the following week.

“It was clear this was not us complying with the law, but a hit on civic institutions and emergency services in Australia,” said one whistleblower.

They claim that Facebook knew it banned not only Australian news outlets but critical organizations like the Department of Fire and Emergency Services Western Australia and the Hobart Women’s shelter.

According to reporters, Facebook’s head of partnerships Campbell Brown called the team’s efforts “genius,” while chief operating officer Sheryl Sandberg said “the thoughtfulness of the strategy, precision of execution, and ability to stay nimble as things evolved [set] a new high-standard.”

This is despite Facebook reportedly knowing internally that, on the first day of the ban, it had blocked 17,000 pages that had nothing to do with news reporting.

Externally, Facebook claimed that the lack of “clear guidance” from Australian authorities forced them to take a “broad definition” of news content.

Now, the WSJ report says that Facebook had all the tools needed to make sure only Australian news publishers were banned but chose to do a wide sweep ban as a negotiation tactic.

A Facebook spokesperson released a statement saying that “the documents in question clearly show that we intended to exempt Australian government Pages from restrictions in an effort to minimize the impact of this misguided and harmful legislation. When we were unable to do so as intended due to a technical error, we apologized and worked to correct it. Any suggestion to the contrary is categorically and obviously false.”