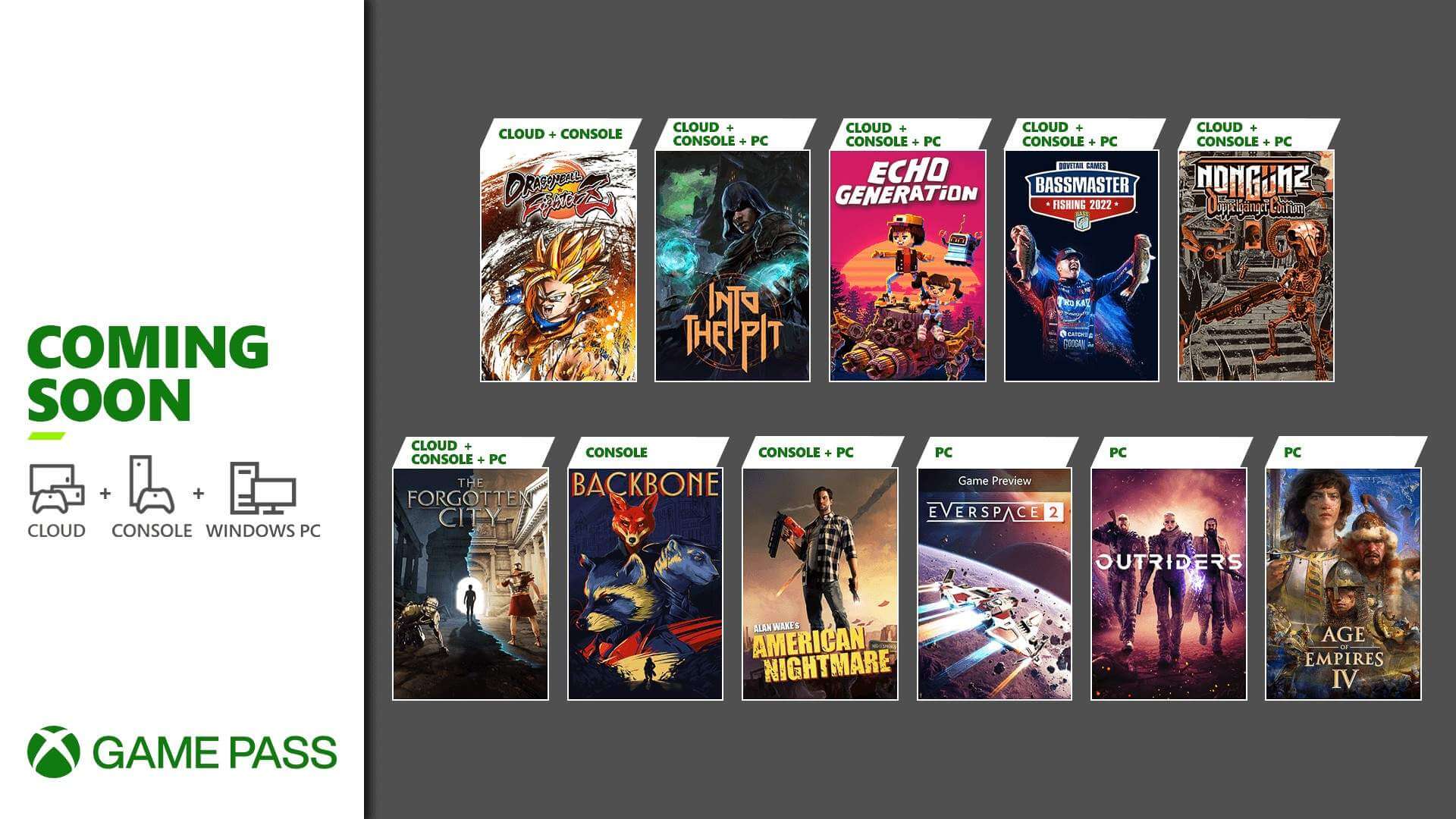 Xbox Game Pass is updated almost every two weeks with new games to play on the service. For the second half of October, the games include several classics like Dragon Ball FighterZ and Alan Wake’s American Nightmare as well as some Day One release.

According to a post on Xbox Wire, here is everything coming to Xbox Game Pass in the next two weeks:

Into the Pit (Cloud, Console, and PC – Available Now)

Day One to Xbox Game Pass, Into the Pit takes a first person shooter genre and combine it with roguelite gameplay. Make your way through a dark, demonic world, fighting hordes of enemies, gaining new spells, battle unbelievable bosses as you explore deeper into the pit. Will you be able to overcome the dark magic and save the survivors?

Outriders will now be available for PC after coming out for Xbox consoles. While this third person shooter is rich with adventure and RPG elements, the main point is to shoot and survive.

Dragon Ball Z is all about its epic fights and Dragon Ball FighterZ puts you right in the action with all your favorite characters. Create teams of three iconic fighters from the Dragon Ball Z universe and fight in an epic 2.5D traditional fighter.

Echo Generation, available Day One, is a turn-based adventure game where you explore a vast, yet spooky world. Play your turns just right and you might be able to survive some of the scary mutant, zombie, robot monsters blocking your way forward. Build out your party and save your hometown from these mysterious enemies.

Space is your territory and you take your space craft across the galaxies. Use both first and third person flying to maneuver your way through tight spaces, shoot enemy aircrafts, and loot spacecrafts and planets. This open(space)world game will have only a preview for Xbox Game Pass.

The latest installment of the Age of Empires series will release Day One on Xbox Game Pass. This rendition focuses on several of history’s most storied battles with AR-like elements which add more historical context for the battles and locations.

A spin-off to Alan Wake, Alan Wake’s American Nightmare changes the formula from the predecessor to focus on more thrilling action and firepower. Travel as Alan Wake and try to fight of the evil Mr. Scratch!

You’re a down on your luck racoon detective in a grimy world when suddenly you find something that could upend society as you know it. Wander through a pixelated dystopian Vancouver in order to solve the case of a lifetime.

Catching bass takes patience, practice, and a little bit of luck. Coming out Day One on Xbox Game Pass, see if you have the skills to win the biggest tournament for bass fishers: The Bassmaster Classic.

While the title implies no guns, there will be guns. And a lot of them. This action platformer roguelike takes you through an ever-changing gothic dungeon filled with horrifying monsters as you try to figure out the riddle of the caverns below.

There exists a Roman City where if one citizen commits a sin, everyone dies. Loop through time to try to figure out who’s the one causing the sin and see if you can save this cursed city from its doom.