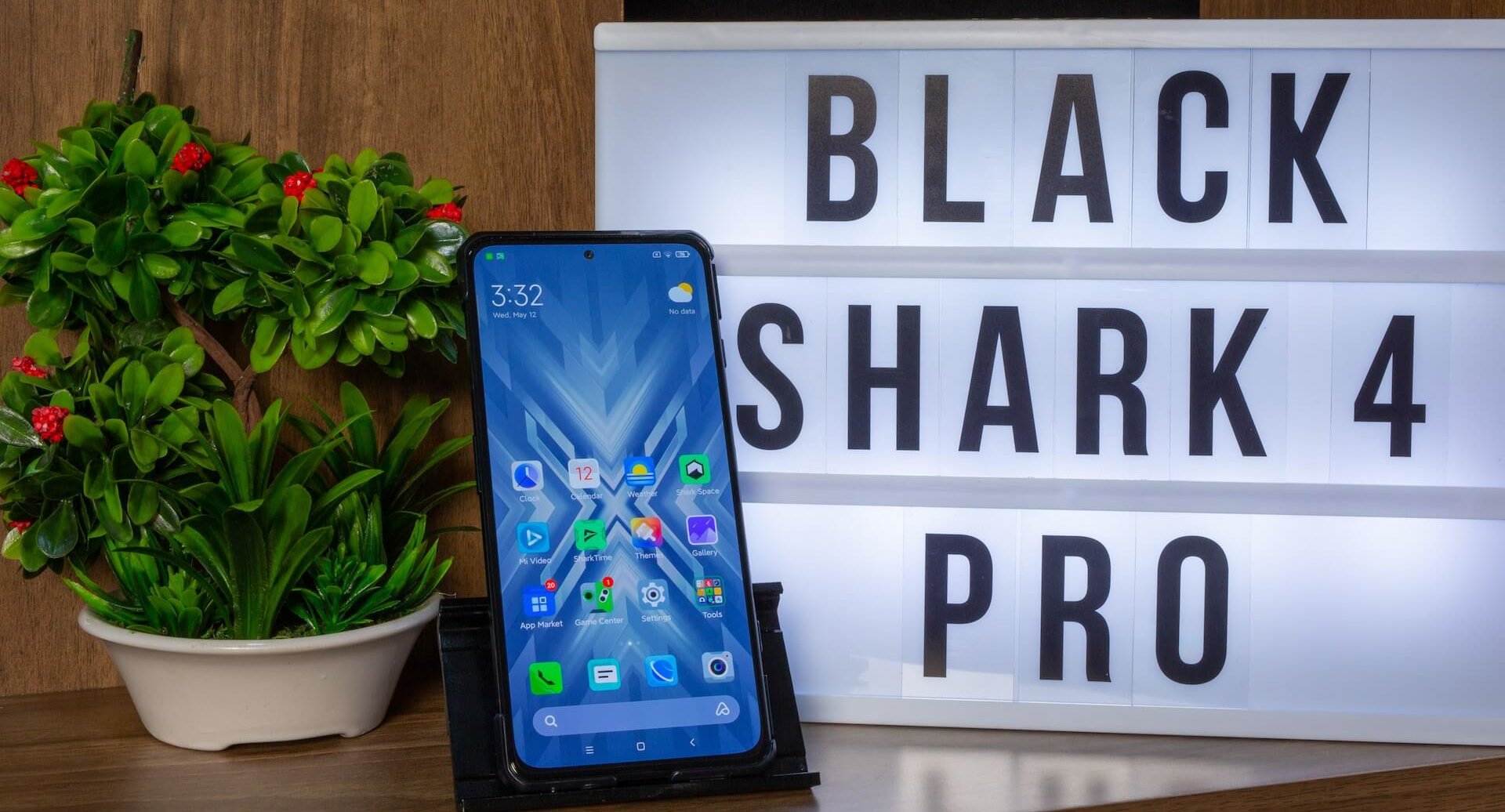 Gaming phones on a budget? Didn’t think I’d see the day! Yet, every single thing about the new Black Shark 4 series points in that direction, starting with the price and specs. Beyond the spec sheet, though? You will find incredible forethought towards gamers and non-gamers alike with features and other cool things you won’t find in the standard spec sheet. And I should know, as I’ve spent the last couple of weeks discovering the Black Shark 4 Pro.

First impressions? The Black Shark 4 Pro isn’t your typical gaming phone. The design language I normally expect from this type of phone has been pared down to a simple and sleek unibody like most flagships nowadays. Just as we suspected a while ago, there’s no more X on the back or triangle-shaped camera module; instead, Black Shark went with a horizontal setting for the triple rear camera.

Why would Black Shark risk looking bland when compared to its competitors? In my opinion, there’s two reasons for the change in design. One, Black Shark wants to blur the lines between flagship, every-day-use phones and gaming phones, catering to a larger audience. Secondly, the company is stripping down the phone to reduce costs and to be able to offer a gaming phone… on a budget.

The version I played with, for example, is the 12GB of RAM Pro configuration which sells roughly for $690. That’s $300 less than the average price of a quality gaming phone.

And Black Shark isn’t skimping on quality, either. Here are the coolest things I came across – use the links below to get faster where you want:

2. Alarm or weather info? Both!

4. Audio adjustments at every level… even in multi-app mode

9. Logo effects… just make sure you remember them!

The Black Shark 4 Pro is not a tiny, compact device. Although not bulky, it has the internals of a processing beast and the display of a phablet, coming at 6.67-inches. The fact that it pops out of the back pocket of your jeans might not sit well with you although you might let it slide when you experience the refresh rate and great touch sampling rate.

Here, Black Shark 4 Pro shines. I was aware the phone came with a 144Hz refresh rate but digging through settings I found out that that is reserved for games only (and you have to enable it manually). The phone will be working with a 120Hz refresh rate the rest of the time.

While in settings, I found out Black Shark included an anti-flicker mode for low light conditions which, while not a life-saver, is definitely a useful thing to have.

As with other Android phones, the notch can be “hidden” under thicker bezels, if you dislike the disruptive cutout. And you can customize the heck out of it, choosing different animations for incoming notifications and themes for the always-on feature.

Alarm or weather info? Both!

A good alarm tone can make it or break it. What? The day ahead, of course. So I try to always choose one that’s loud but still whimsical enough to make me want to embrace the day instead of hiding under the sheets.

As I checked Black Shark’s ringtone list, I found with surprise one that not only sounds differently depending on the current weather but that can also offer weather info, while it’s at it. Talk about multi-tasking! Besides the weather alarm, there’s also a “nature” one which changes according to date. Translation: it probably takes into account the season, more cheery for spring, laid-back for summer and so on.

And if you’re wondering how the audio is… let’s just say Black Shark 4 Pro won’t disappoint you. In the least. The dual symmetrical loudspeakers work in tandem with DTS:X Ultra from the get-go which, for me, translated into (some of) the best spatial audio experience I’ve had.

You’ll understand the importance of immersive audio when you’re in a game, as Black Shark 4 Pro will do real distance rendering and place audio objects in space with extreme precision. In landscape mode, this will be immediately apparent, while in portrait, you will lose some of that effect.

The same audio power can be obtained when listening through headphones. In Settings – Sound, you will find DTS Sound functions that you can dabble with. There’s even a short demo with a gullible frog you can play to feel the full effects of the spatial audio.

I, for one, felt wrapped up in a sound blanket as soon as I attached my wired headphones through the – thankfully – present audio jack. From that point on, you’ll have the option to set your EQ or choose a preset according to the brand of your headphones. There’s plenty to choose from, like Skullcandy, Steelseries, Sony, Asus, even Apple up there.

Audio adjustments at every level… even in multi-app mode

Running multiple apps at the same time? Who doesn’t?! Going back to lower the volume on one or mute it so you can enjoy the audio from another one is a UX headache we would do anything to avoid. Turns out, I found that with a simple tap I could make this phone adjust the audio for each individual app while they all ran simultaneously. Pretty cool trick, right?

Before we close the audio chapter, I have to say this: BlackShark and DTS did a very good job on this phone. In-game, while listening to music or a movie, I perceived a super wide sound stage and overall, a balanced audio scene with less treble than on similar devices and great bass. It’s true, if you turn up the volume to max, you will notice a light distortion but you’ll find out soon enough that there’s not a real good reason to go all the way up since even at half the volume, you won’t have trouble understanding lyrics or dialogues.

Did you think I’d gloss over these babies? Not a chance. I may be surrounded by tactile interfaces, from my phone to my earbuds to my smartwatch, but I can still appreciate physical buttons. In this case, snappy, magnetic shoulder buttons that are not only satisfying to use in-game but also outside of it.

For casual gamers, Black Shark has made these master buttons mappable depending on the app you have opened. Pop them up and you’ll discover that, in Settings, one can take screenshots while the other enables one-handed mode.

In the native camera app, though, one can act as a shutter button while the other can enable the timer.

It doesn’t get cooler than this! Or does it? What if I told you you can change the sound effect of the button trigger? I personally ended up with “Electric”, which feels very Minority Report, although they come with “Bullet loaded” effect by default.

Speaking about camera, the front shooter might not be the best out there for selfies but it enables face recognition and for that, I am grateful. No, I’m not being dramatic. I actually found the face registration process incredibly fast and the face unlock almost instant but most importantly, you actually have the option to unlock your phone with your face to then jump into the home screen. Directly.

This means you bypass the lock screen entirely, which is, you may or may not know, impossible to do with iPhones, for example.

As for the camera itself, don’t expect miracles. Black Shark 4 Pro may have changed its clothing, but it remains a wolf shark. In daylight, photos look too cool for my taste – literally – the white balance is off and you will easily notice a magenta tint in the right setting.

In low light, you do get pretty good stills and with less noise than I expected. Night Mode helps a bit too well, as it over-sharpens the photos.

Video recording, however, is very noisy in low light and it will apply a smoothening effect by default – beware of that!

I appreciated the application of bokeh, though, and the results I got with HDR enabled, in daylight.

Aware of users’ increased anxiety after popular social media apps misused their data, Black Shark pressed for transparency with this phone. The Black Shark 4 Pro shows a history of each time an app accessed your data and what info did it request. Plus, JOYUI apparently creates a virtual ID for each user for apps to use (instead of the unique identifier).

With a 4,500mAh battery cell, it’s no wonder this phone is doing its best to save up battery. You’ve got your usual battery (and ultra) battery saver plus the 120W charging adaptor so you can at least juice up your dying battery incredibly fast.

But what I noticed is that there’s something extra for us in the phone’s settings. And that’s intelligent charging, the ability of the device to temper the speed of charging as the temperature goes up.

Logo effects… just make sure you remember them!

There’s two more things I really liked about this phone. The first of the two is the lighting of the logo. Placed on the back of the phone, under the camera, it will light up differently – in color and animation – when you’re charging the device from when you’re getting a call or playing music.

Finally, if you’re sharing this phone with your kid, you won’t have to look over their shoulder while they scroll, tap and smash those master buttons. Instead, you’ll be able to create a Kid space just for them. No, it’s not the second space MIUI normally offers, creating two phones in one. That’s still available for your work-related tasks and productivity apps.

What do you think – with all these features on board, flagship specs and affordable pricing, is Black Shark 4 Pro a top gaming phone in 2021 and maybe the first budget-friendly gaming handset?