DDR4 vs DDR5 RAM: What Are the Differences and Is It Time to Upgrade Your PC? 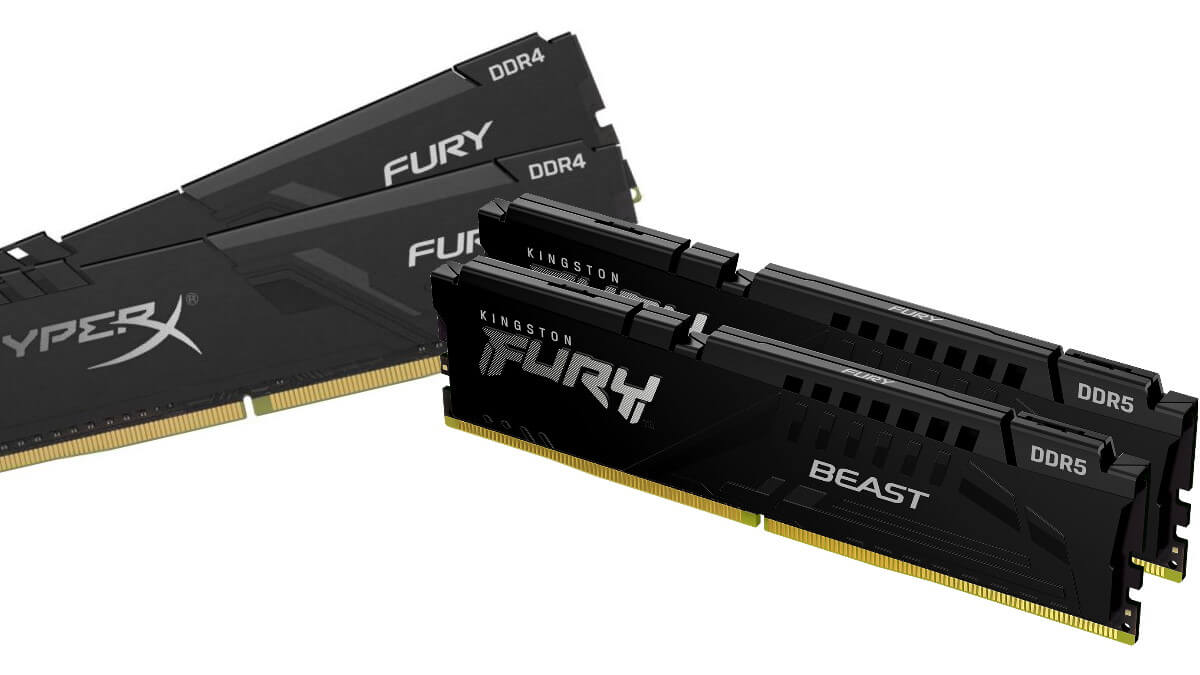 DDR4 vs DDR5 Memory: What Are the Differences and Is It Time to Upgrade Your PC?

Whether you’re a PC gamer always chasing peak performance or someone looking to upgrade their workstation, you have to keep your PC or laptop always up to date with the latest technical advancements. Or do you?

With the launch of DDR5 RAM in late 2021, many are wondering whether it’s time to upgrade their system or if, in the interest of budget, skip a generation. Considering that the chipset shortage also overlaps with the DDR5 shortage, upgrading to DDR5 has more pains than expected. So, is it worth it?

Here are the main differences between DDR4 and DDR5 and what applications are worth buying DDR5.

Compared to DDR4, DDR5 offers multiple improvements such as increased bandwidth and data transfer rates. Moreover, in terms of memory, the newer one begins at 4,800 MT/s, while DDR4 tops at 4,400 MT/s.

Without going into technicalities, basically you can have a lot of RAM in a single motherboard slot.

DDR5 also promises more power efficiency, with an operating voltage of 1.1V as compared to DDR4’s 1.2V. For laptops and tablets, that could spell longer battery life.

If you want to take a look at other numbers, Tom’s Hardware did an amazing job of delving into minute details and benchmarks. If you just want to know if you should upgrade your PC in a nutshell, read on.

Will DDR5 make a difference for my job?

In theory, yes. In practice, it obviously depends on what you do on your workstation on a daily basis.

DDR4 vs DDR5 for productivity purposes has negligible improvements in some software and tangible ones in other apps.

For 7zip, archiving files was significantly faster with DDR5, with up to 20% faster for huge files. If your job involves lots of data transfers, then DDR5 is worth it.

For graphic designers, illustrators, photographers doing bulk photo editing and anyone who has to use Photoshop day to day, the difference between DDR4 and DDR5 won’t be obvious.

Just take a look at these benchmarks from PugetSystems.

However, the same company ran benchmarks for Adobe After Effects and found videographers could get a significant boost in performance – up to 15%.

For video editing, PCMag found that, when compared to a mainstream DDR4-3600 CL16, a DDR5-4800 CL40 kit only raises performance by a mere 2% in Adobe Premiere Pro, and the DaVinci Resolve performance increase was similarly small.

You can see more tests here.

Will DDR5 make a difference in gaming?

It will but it will come at a cost many find it hard to justify upgrading from DDR4. Since RAM is not backwards compatible, you’ll probably have to upgrade your motherboard.

Even the other way around, you can’t use DDR4 in a DDR5 slot. That’s not out of the ordinary for those chasing peak performance but, right now, for a gaming PC, DDR5 RAM only offers minimal improvements.

Techspot tested 41 games, from PUBG to Assassin’s Creed Valhalla (and even the oldie StarCraft II) and found that DDR4 performance still doesn’t justify upgrading to DDR5.

Furthermore, it was just a week ago that PCGamer ran with the headline “DDR5 is finally relevant for PC gaming.” They were talking about the first DDR5 memory sticks with a sub-30 CAS latency.

Google Play Games on PC: How to Play Android Games On Your PC

If you want to upgrade your gaming PC to DDR5, look for G.Skill’s Trident Z5 RGB, Trident Z5, and Ripjaws S5 RAM. However, PCGamer also notes that the reduced latency they offer will only translate into “a few frames per second.

However, this upgrade might bring with it other expenses. While DDR4 and DDR5 have the same amount of pins (unlike previous versions which always modified the layout), the design itself is different. Unlike the transition from DDR3 and DDR4 for example, which saw some motherboards like the Biostar H170Z3 and H150Z5 motherboards capable of using both, it’s almost impossible to find a motherboard that houses both DDR4 and DDR5.

A DDR5 motherboard, another big expense

It was just this March that we saw the first dual RAM motherboard capable of supporting both RAM types, the Onda H610M+, which could take up to 32GB of RAM.

Still, it can’t use both types of RAM at the same time and it also has only two slots.

Gone are the days of a smooth transition where you wait for RAM prices to drop and snag smaller ones when they’re on sale. You have to commit to 32GB in one go and, obviously, those are more expensive.

An affordable DDR5 motherboard is still hard to find. On Newegg, out of around 30 models, we could only find 3 of them under $250. Most DDR5 motherboards fell around the $400 price tag and a few went up close to $1000.

All in all, if you plan to upgrade to DDR5 make sure you budget not only the DDR5 RAM but also a DDR5 motherboard.

If budget is something you’re really mindful of, in the DDR4 vs DDR5 RAM competition DDR4 comes on top on most accounts. Does RAM speed matter? Yes, of course. Is DDR5 the best RAM for gaming? As you can see, no, not right now. To treat yourself, get the fastest DDR4 RAM and you’ll get the most bang for the buck.

As it stands in early 2022, paying a 100% premium for a maximum of 20% performance boost is something only professionals or serious enthusiasts can justify.

DDR4 vs DDR5 Memory: What Are the Differences and Is It Time to Upgrade Your PC?