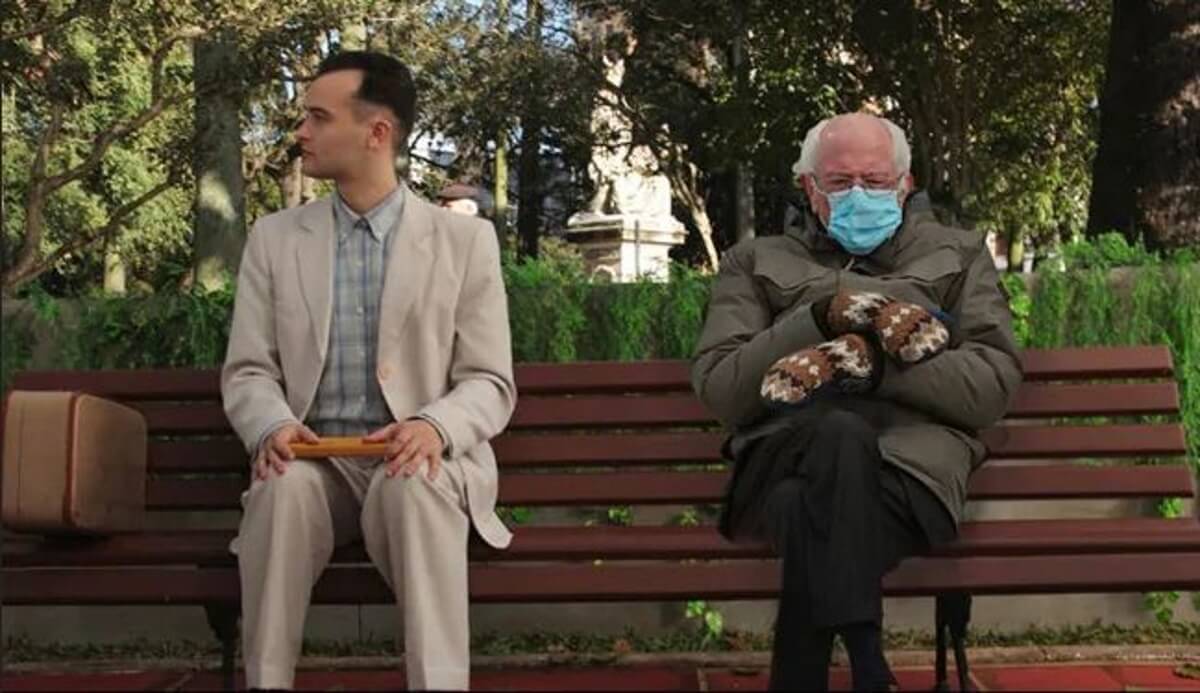 With President Biden’s inauguration ceremony, a new meme was born…and one with endless potential!

Saw the tons of Bernie memes and discussions if he was fashionable enough or respectful enough for the proceedings?

Now it’s super easy to make yours without any Photoshop skills!

This app lets you put Bernie anywhere on the map – just input the address and it will automatically photoshop Bernie Sanders, the very picture of disappointment wearing adorable mittens, into the location you choose.

Bernie can sit and expectantly chill in front of your house, the most crowded and hip place in town.

Anywhere you think the disappointed Senator fits, the Bernie-Sits app can generate a photo!

How to put Bernie in a picture on iPhone, iPad, Android, your PC or whatever device you have, with no Photoshop needed? Just use this Bernie sits app. Scroll below to see some Bernie Inauguration memes and how they were used to raise millions for charity.

Here’s him in front of our office – it’s kind of a daily snapshot of someone forgetting their keys or waiting for Uber to finally find a car.

And if you want your own Bernie Sanders mittens, the story of how he got them is truly heartwarming.

The Bernie Sanders mittens meme traveled so far, it even has its own Wikipedia page! Part of this success is because of Bernie Sanders himself, who fully embraced the memes about himself and even sold them to raise money for charity

The Bernie Sanders meme raised more than $1.8 million so far and, thanks to this Bernie meme Photoshop app, that train won’t stop anytime soon.

While she couldn’t possibly fulfill so many mittens orders, Ellis is now working with Darn Tough Socks to make socks with the Bernie mittens pattern, with proceeds going to support Vermont’s food bancks.

And if you made a lot of Bernie memes already and also want to give back to charity, just FIY: the Burton jacket Bernie Sanders wore at the inauguration of Joe Biden is still on sale and Burton already donated 50 of them to charity.

Or you could keep using this Put Bernie in a picture app to support meaningful causes – every bit of awareness helps!

I made this Bernie sitting meme to contribute to the cause pic.twitter.com/kvHADLRFJI