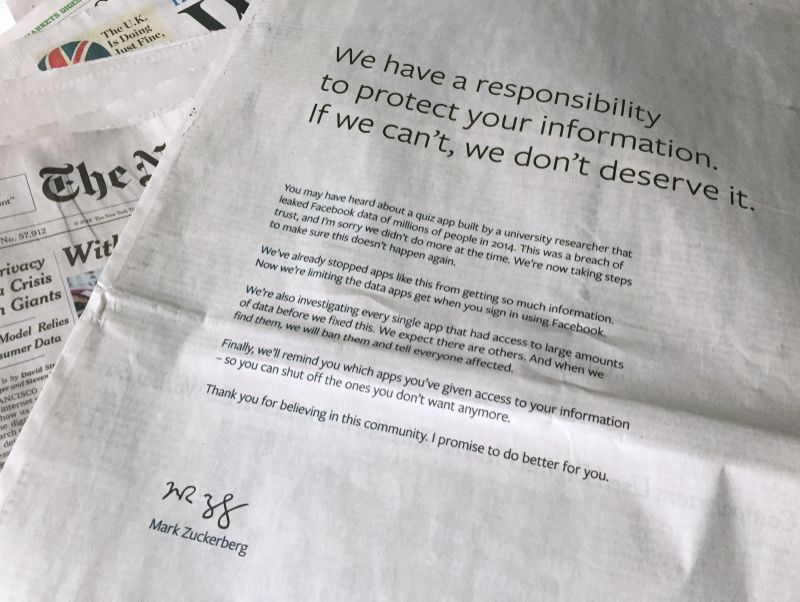 A few days ago, Facebook CEO Mark Zuckerberg broke his silence and publicly announced his stance on the massive Cambridge Analytica scandal that left the social media giant reeling. Now, Facebook has taken out full-page ads in several U.S. and UK newspapers as a way of further expressing their remorse.

The advertisement tries to work in several ways: as an apology, admission of guilt, and promises to change. Given that the company failed to protect users’ data and remained silent while said data was used to sway the U.S. presidential election and the Brexit vote, this ad may be one of many steps Facebook has to take to recover public trust.

Check out the full text from the Facebook ad in newspapers like The New York Times or The Sunday Telegraph (image via AP Photo/Jenny Kane):

We have a responsibility to protect your information. If we can’t, we don’t deserve it.

You may have heard about a quiz app built by a university researched that leaked Facebook data of millions of people in 2014. This was a breach of trust, and I’m sorry we didn’t do more at the time. We’re now taking steps to make sure this doesn’t happen again.

We’re also investigating every single app that had access to large amounts of data before we fixed this. We expect there are others. And when we find them, we will ban them and tell everyone affected.

Finally, we’ll remind you which apps you’ve given access to your information — so you can shut off the ones you don’t want anymore.

Thank you for believing in this community. I promise to do better for you.

While Facebook attempts to regain public support, the rest of the tech industry is not doing him any favors. Last night, Apple CEO Tim Cook commented on the Cambridge Analytica fiasco, calling for better regulations in what seems like the company’s long tradition of fighting for their users’ rights to privacy:

“I think that this certain situation is so dire and has become so large that probably some well-crafted regulation is necessary. The ability of anyone to know what you’ve been browsing about for years, who your contacts are, who their contacts are, things you like and dislike and every intimate detail of your life —from my own point of view it shouldn’t exist.”

Apple Co-Founder Steve Jobs himself took shots at Mark Zuckerberg about privacy concerns back it 2010, telling an audience that “Silicon Valley is not monolithic. We’ve always had a very different view of privacy than some of our colleagues in the Valley.” These sentiments are echoed by other tech notables as Tesla and SpaceX CEO Elon Musk deleted both his company’s Facebook pages and WhatsApp’s co-founder publicly supported the #deletefacebook movement.

With new reports coming out every day on how Facebook has managed user data, it may be a long time before the company earns back its users’ trust. This ad may be the first step in that direction.