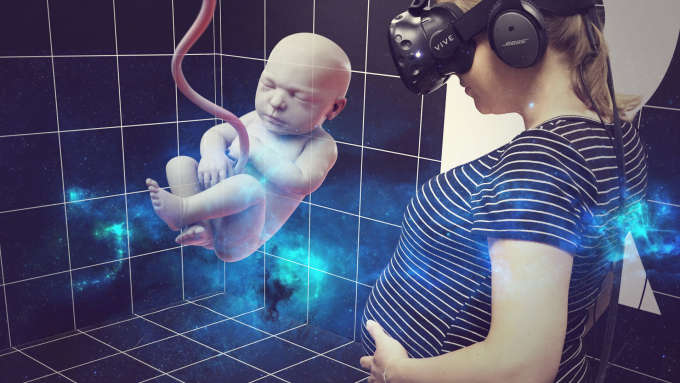 Samuli Cantell became newsworthy after meeting his daughter before she was born. No, not at an ultrasound, but in virtual reality, when the baby was still in the womb #realitymagic

Cantell couldn’t wait to see his child in the flesh so he convinced his girlfriend to have a 4D ultrasound scanning of the future baby. The picture was pretty messy so he sculpted it afterwards in 3D, creating a model that could be viewed in virtual reality. Cantell said he imported  DICOM ﬁles to osiriX lite in order to make the initial 3D model, before tweaking it to look as it was supposed to.

After this step, Cantell placed the model in a Unity project and opened it up with virtual reality gear. In just one week, the dad-to-be saw what his baby would look like after birth.

“When I put the VR glasses on for the first time, the experience took my breath away. Even though I knew this was only a 3D model, the fact that it was based on our unborn child and the power of this immersive experience really blew my mind. For the first ten minutes is was just sitting still on the floor watching her floating in the air next to me. It was very emotional and calming, yet unreal,” says Cantell.

If you want to have a more complete, immersive one-to-one “dialogue” with your future kid, check out Cantell’s entire story for more details.

One thing, though: couples should try this before the pregnancy reaches 32 weeks so the image is more clear and easy to transform in VR content.