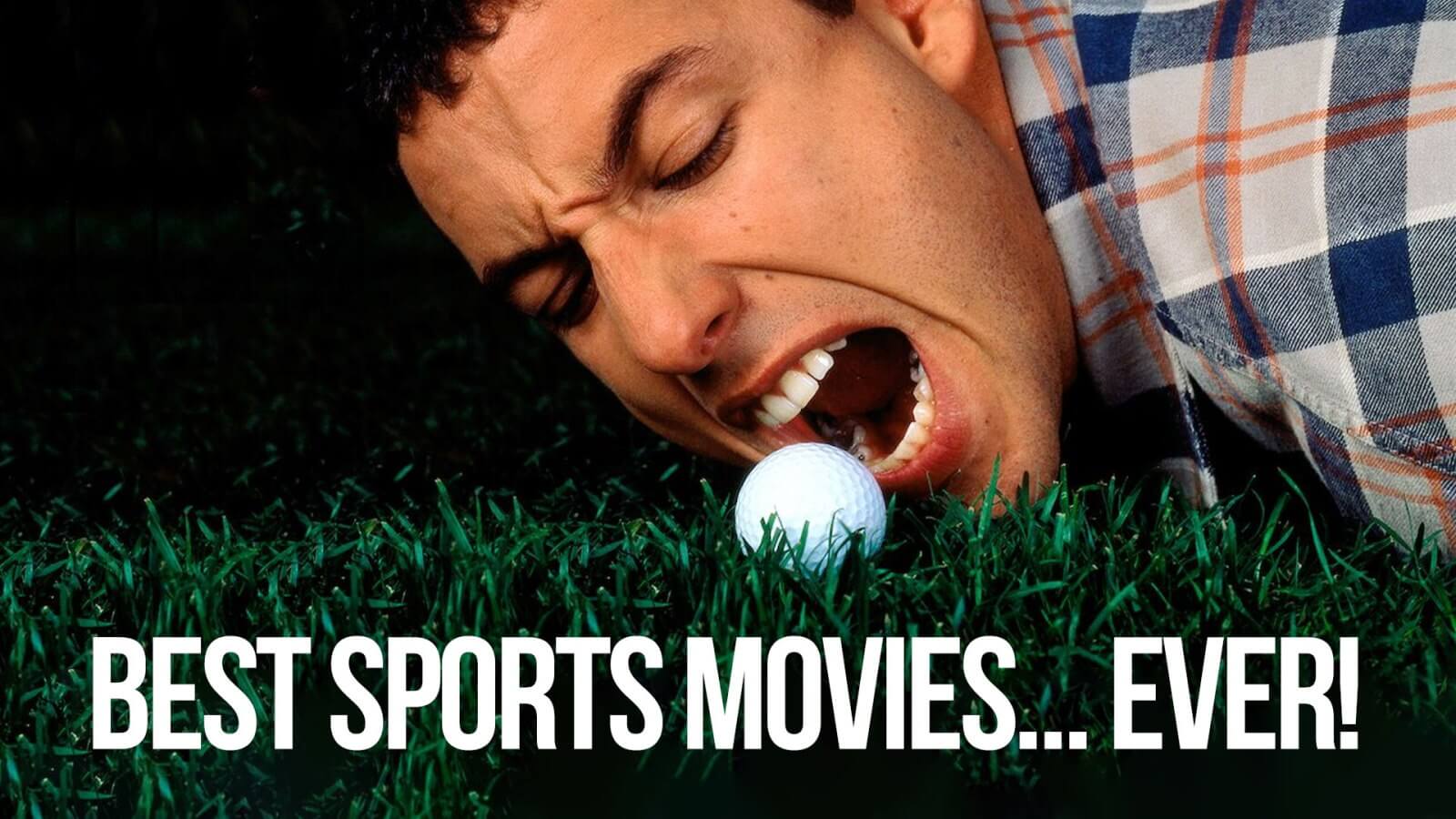 We rounded up the greatest movies of all times, just in time to celebrate the U.S. Open.

Thanks to our TiVo Stream 4K, we found some hidden gems we bet you didn’t know!

So, what makes a sports movie great? Is it the effort, the commitment, the obsession to go the extra mile? Is it the underdog story? Is it the motivational coach giving it his all?

No matter which part you like most, I got here for you the very best sports movies of all time – and I bet you missed some of these awesome flicks!

Just a couple of days ago I opened my Tivo Stream 4K and saw the golf channel featured front and center. I mean, I aint a swinging man and I can’t do no trickshots, but this did remind me of an older love of mine.

It’s Happy Gilmore, one of the best comedies of all time – and probably the best golf movie ever.

I wanna dive into the list of the best sports movies by paying homage to Adam Sandler cuz…you know…way before he figured out he can go to Hawaii, have fun with his friends and get paid to make a low effort movie..dude had some seriously good projects going on.

And Happy Gilmore is the best of them all!

This 96 comedy is the best of the 90s in one single package.

You have golf, a sport you don’t initially associate with comedy, and you have a dude who sucks at hockey, gets sad, then discovers he’s amazing at golf.

Happy Gilmore is, for me, encompasses what makes a sports movie great. You have the loser, who has to go through some serious ordeals to justify his win, you have a great inspirational story….and then you just pile on some stupidly hilarious scenes.

I’d show you one, just to convince you to watch or rewatch this movie, but it’s literally impossible for me to pick…since everything is just so hilarious!

I got the same problem with this next recommendation. Literally everyone and their mom saw Rocky at one point or another, but not many people rewatch this gem!

Seriously, if you ask someone what Rocky is about, they’re going to be like…Uhmm, Sylvester Stallone boxing and running up some stairs?

Well, actually, it is that buuut most people forget…or didn’t know, that Rocky also got like 3 Academy Awards.

This is not your average sports movie, nor your average action star. Rocky is THE inspirational story that inspired generations to rise above challenges, and literally put sports movies on the map.

But let’s move on to lesser known movies, because I wanna find your next great watch.

I went through my Tivo to find everything I ever watched and get some new recommendations, and this is what I found.

I’m gonna go ahead and list a couple of more boxing movies, cause …you know…this sport is just so cinematic, but I’ll also give you the best stuff to watch from any place where man or woman breaks a sweat in the pursuit of greatness.

Fat City shows both sides of the coin when it comes to being a sportsman – just starting out and having that conviction that you deserve to be on top, and being on the way down, navigating a failing body and career.

I saw someone saying that Fat City is the stuff dashed hopes and broken lives are made of…and I can’t agree more.

This movie shows the dark side of movies like Rocky. The characters are poor, spend their lives in horrible places, drink in dive bars, and just keep moving, hoping that something good is around the corner… but the odds are, that good is never there.

You’re going to need a pick me up, a sort of palate cleanser after Fat City, so this is what you need.

For literally no chill and just bone-crunching fear and adrenaline, Raging Bull is what you need. It came about a decade later, in 1980, and it’s going to make you say that whole “They don’t make’m like they used to” .

Don’t expect a fluffy feel good tale from Martin Scorsese, cuz you know he ain’t about all that. Instead, expect one of the best roles Robert DeNiro ever had, in a movie that’s so violent and toxic, you’ll need to chase it down with some romcom afterwards.

Oh yeah, and don’t expect any accuracy or commitment to reality, because Scorsese said “I don’t know anything about boxing”…and it shows.

He does know a thing or two about making a fantastic movie, so add this one to your list!

And speaking of literally no chill, Murderball is what you need to see if you’re into that.

I feel bad even talking about the plot, since this movie is about quadruplegic athletes who do wheelchair rugby, a sport so tough, I literally had to look away during some scenes.

This is not some feel-good documentary about moving past your limits, this is like modern day gladiators – all about the fight, all about living life to the max, all about …well..not giving a fuck and going at full speed.

But enough of the violence – this is not an essential ingredient in a great sports movie. Case in point: Caddyshack.

Going back to golf, this is another great flick to add to your list…and tragically underrated too.
Caddyshack came out in the 80s, had almost no success, and since then it shows up here and there on some random IMDB threads.

Still, it’s a great comedy with a cast that can’t be reproduced today. You’ll get muscle soreness laughing so bad thanks to Bill Murray, Rodney Dangerfield and Chevvy Chase.

Best sports movies: Any Given Sunday

But if you want drama, realism and some NFL, give this one a chance.

Any Given Sunday is a fantastic movie that shows just how football looks like, from all the angles, including the unglamorous one.

It’s surprisingly made by Oliver Stone, who’s a lot more famous for making sleek political movies that feel more like documentaries, so Any Given Sunday doesn’t feel like any old sports movie. It’s a lot sleeker…but also very gritty and so fast pace your head is going to spin

It also has one of the earliest and best roles from Jamie Fox but like the whole cast is insane.

There’s Jamie Fox, LL Cool J, Al Pacino, Cameron Diaz, Aaron Eckhart and even Charlton Heston…and the soundd…. Man, the sound! When a match gets going, it’s like Godzilla crashes into the stadium.

Overall, I’d say Any Given Sunday is the best showcase of machismo ever…and prolly has the best motivational speech in a sports movie, ever.

I’d follow this one with some baseball, for a chance to chill, and a movie from 88 that’s perfection…even if it looks cheesy as hell at first glance.

It’s called Bill Durham and has Kevin Costner and Susan Sarandon in the main roles…which might make you think it’s the type of romantic comedy your mom might watch.

Well, in all fairness, that’s probably true, but you’ll also love it if you give it a chance.

So, the story is basically this. Susan Sarandon loves baseball. She loves it so much, every season she picks out one promising player, and gets into a relationship with him. The catch? That player usually goes on to have the best season of his career.

It’s an unlikely plot, and it’s even more unbelievable that this movie actually has a love triangle – but if you watch it, you’ll be surprised just how well it comes together.

Annie, the main character, has to pick between a new pitcher, who’s wild and has a weird type of anxiety when playing, and a veteran catcher, who’s a lot more philosophical and less inclined to play into Annie’s game.

I’m telling you – this movie is weird but good.

Still, if you just want a straightforward, classic sports movie game, I got just the thing.

Remember White Men Can’t Jump? If you don’t, I’d say it’s time to look it up because you missed one of the great movies of all time.

If you do, I bet you forgot just how great it is, so add it to your rewatch list!

For me, White Men Can’t Jump is up there with My Cousin Vinny when I just want a good, fun and smart movie, no questions asked. To be honest, I also stole a couple of outfits from Woody Harrelson and I wouldn’t mind some sneakers like Wesley Snipes had.

These dudes make a legendary pair in this 1992 movie about basketball hustlers first competing, then working together.

Most people remember this movie as a comedy but it also had plenty of drama, showing just how tough LA used to be back then…and how people tried to hustle to build a life.

And if white men can’t jump, I’d say no one can kick quite like Pele – and even if you know nothing about soccer, you’ll see what I mean after watching Victory.

This 1981 movie has a surprising cast: the heavyweight Michael Caine, the respectable Sylvester Stallone…and Pele, probably the greatest soccer player of all time.

Victory also has an unusual story, inspired by real life. Some world war 2 prisoners of war are playing a match against the Germans, so they figure they will use this opportunity to make a run for freedom. The twist? They might have a better chance to change the world by staying there, and confronting the Nazis in the stadium.

I won’t tell you how this story ends cause you’re gonna wanna watch for yourself!

So, this was it. I think I covered the best sports movies from like most sports – but I know for sure I must have missed a few.

Drop me a comment below and tell me which one is your favorite, and which one did I miss, and let’s make a list of great stuff more people should watch.