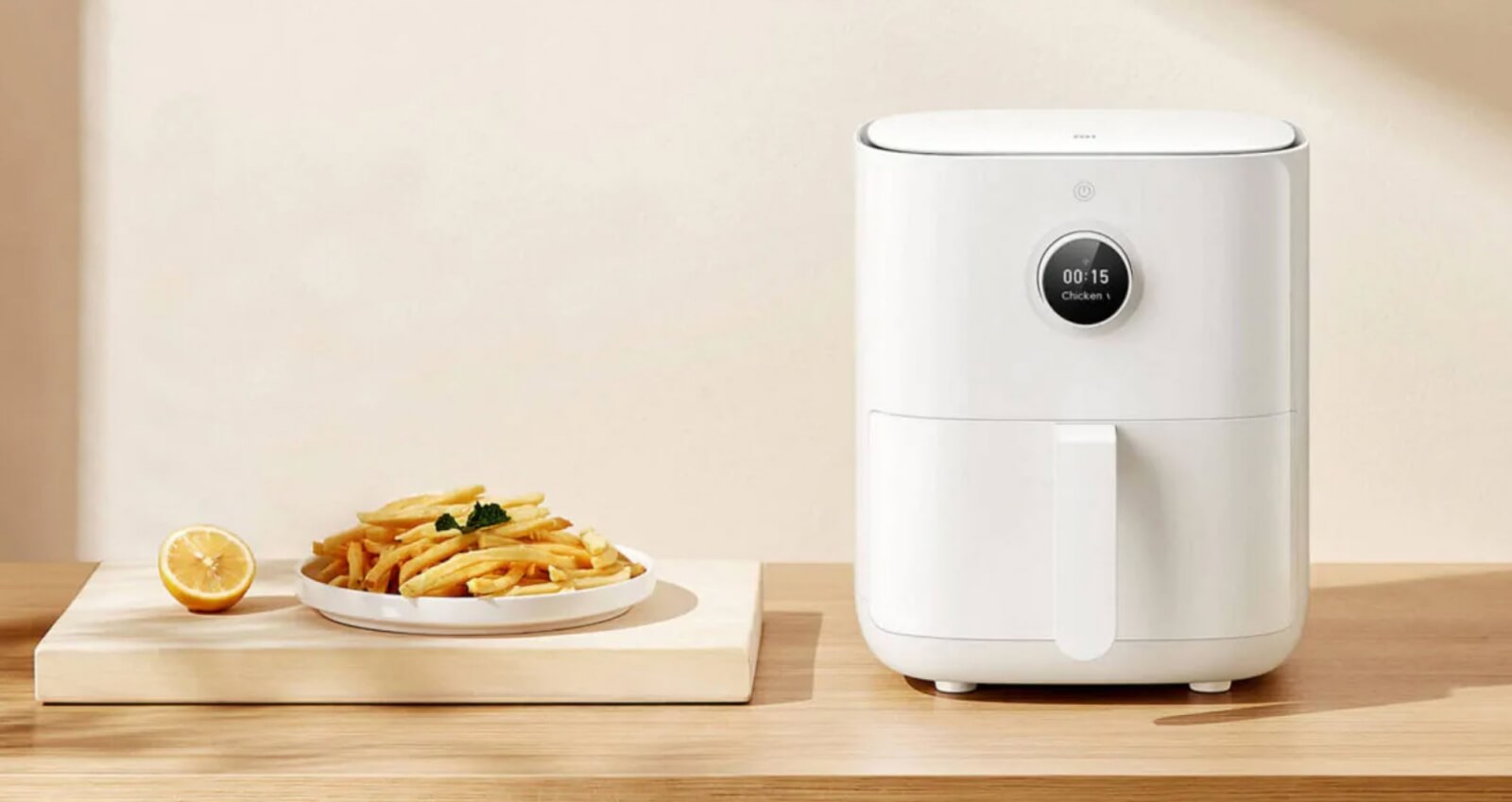 For many, replacing an oven with an air fryer used to be an unthinkable idea. Now, with ever-rising energy prices and, thanks to convenient junk food, ever-expanding waistlines, an air fryer might just be the smartest idea.

When I got the Xiaomi Smart Air Fryer in for review, I sighed at the idea of one more unused appliance cluttering my kitchen – and one more device whose “smart” functionality consists of a janky, buggy app. Of all the smart appliances I tried, the only kitchen gadget to remain on my countertop was Xiaomi’s smart rice cooker. Now, after three weeks of testing the Xiaomi Smart Air Fryer, that rice cooker has a new friend.

At first glance, the Mi Smart Air Fryer is one of the most minimalistic kitchen appliances available on the market today.

It’s a white cube with only a handle, a universal button and, right above it so discreet you’ll miss it at first, the power on button.

One of the things that also stopped me from jumping on the air fryer craze was the multitude of buttons and icons on most options on the market – do you really need a pictogram showing you a carrot? Personally, I don’t. Unfortunately, my kitchen is cluttered enough as is, without adding overly-complicated appliances that require me to navigate dozens of icons.

In the case of the Mi Smart Air Fryer, Xiaomi managed, as they usually do, to streamline the design so that the appliance is an understated and easy to clean addition to any kitchen. The container has a sturdy-looking non-stick coating that can be cleaned in mere seconds – the same amount of time it takes you to wipe down the entire machine.

Since it weighs under 4 kilos, moving it around the kitchen is a breeze.

And what about that lack of…well, everything? There’s no big display, no dozens of buttons, just a universal button with a tiny LCD display.

While you’d think a single button would force you to rely on the Xiaomi Home app even when frying an egg, it’s not the case here.

Just slide in the food tray and, with a couple of quick turns and button pushes, you can set the temperature and duration for your meal even faster than you’d do it in the app. Indeed, after week two, I found it way easier to just use the Mi button for everything. Since the air fryer was used as a secondary tool while I was chopping ingredients, minding a pan or just generally getting my hands dirty in the kitchen, using my phone to control the machine was too much of a hassle but the button was perfect.

This air fryer has a 3.5l capacity, which makes it perfect for a single person or cooking for a couple of people. Any more than that, and you simply don’t have space in the container, especially if you use it to cook bulky foods like vegetables.

Fries? I know it, you know it, everyone knows it: the main reason to switch to an air fryer is to eat guilt-free fries as often as you want.

Fortunately, the Mi Smart air fryer’s pan holds just enough fries for two people and makes them perfect every time. For hand-cut fries, 15 minutes at 180 degrees with another minute at 200 was enough to make them crispy, with just a spray of cooking oil on them, while the packaged ones were ready in as little as 7 minutes with only a bit of salt added.

Since most burners can’t offer the heat required to perfectly cook all veggies in a stir fry, the Mi air fryer was a great help in handling at least half of the ingredients in a recipe.

It’s here I noticed that you should be very careful about following Xiaomi’s included recipes in the app. While there’s over 100 of them, the first one I tried was wildly inaccurate. The “Crispy tofu” recipe asked for 600 grams of tofu air fried at 200 degrees Celsius for 24 minutes, which sounds like overkill even if you’re inexperienced in the kitchen. I played along and let the recipe run its course and, obviously, at the end, I had the equivalent of dwarvish bread – just cubes of dried tofu as hard as a rock.

I tried again, lowering the temperature at 180 and the time at 16 minutes. The same thing happened – weaponized, not crispy tofu.

After fiddling with the app recommended recipes for a week or so and having to constantly turn down the temperature or time, I created a custom recipe for absolutely everything.

Meet “Master Chef”, the 7 minute, 180 degrees program that can handle mostly anything you put in the Mi air fryer. The crispy tofu had a 2mm thick crisp outer layer and a juicy interior.

For something like chicken wings or thighs, just run my “Master Chef” secret recipe twice and you’ll get crispy yet juicy chicken.

Cooking half of a Scottish breakfast at the same time felt like flying too close to the sun but, against all odds, it worked. Seven minutes at 180 was exactly what was needed to perfectly crisp up the bacon, cook the egg with a runny yolk and heat through a bit of frozen haggis.

Since we rarely cook meat in this household, the Mi Air Fryer was tested mostly on breakfast foods, fries, vegetables and pre-cooked frozen stuff like spring rolls or arancini.

The one time we did cook wings though, the results were simply superb. We started the wings in a cast iron skillet to render some fat away and get that flavorful charring on. The wings were then tossed with some cajun spice and put in the air fryer for about 8 minutes until the skin was crispy and the meat done, not overcooked.

For someone who works from home but rarely eats breakfast or lunch, having this air fryer close means being able to have a hot meal in minutes, without the fuss of taking a half hour break to cook or clean pans.

For use cases like that, the Mi Air Fryer is a 10/10 buy, especially since it’s really hard to justify the energy consumption of a full electric oven when you’re making a single meal or two.

For big families, the Mi Air Fryer’s 3.5l capacity won’t be enough to cook a meal, though it is a handy device to quickly make a snack.

At around $100, the Mi Smart Air Fryer is not the cheapest option in stores but it looks and performs like a luxurious appliance.

Plus, once you factor in the fact that you basically don’t need to turn on a traditional oven anymore or spend money on cooking oils, this air fryer seems to almost pay for itself.

Also read: The Scientist Behind Lickable TV Introduces Electric Chopsticks That Enhance the Taste of Salt