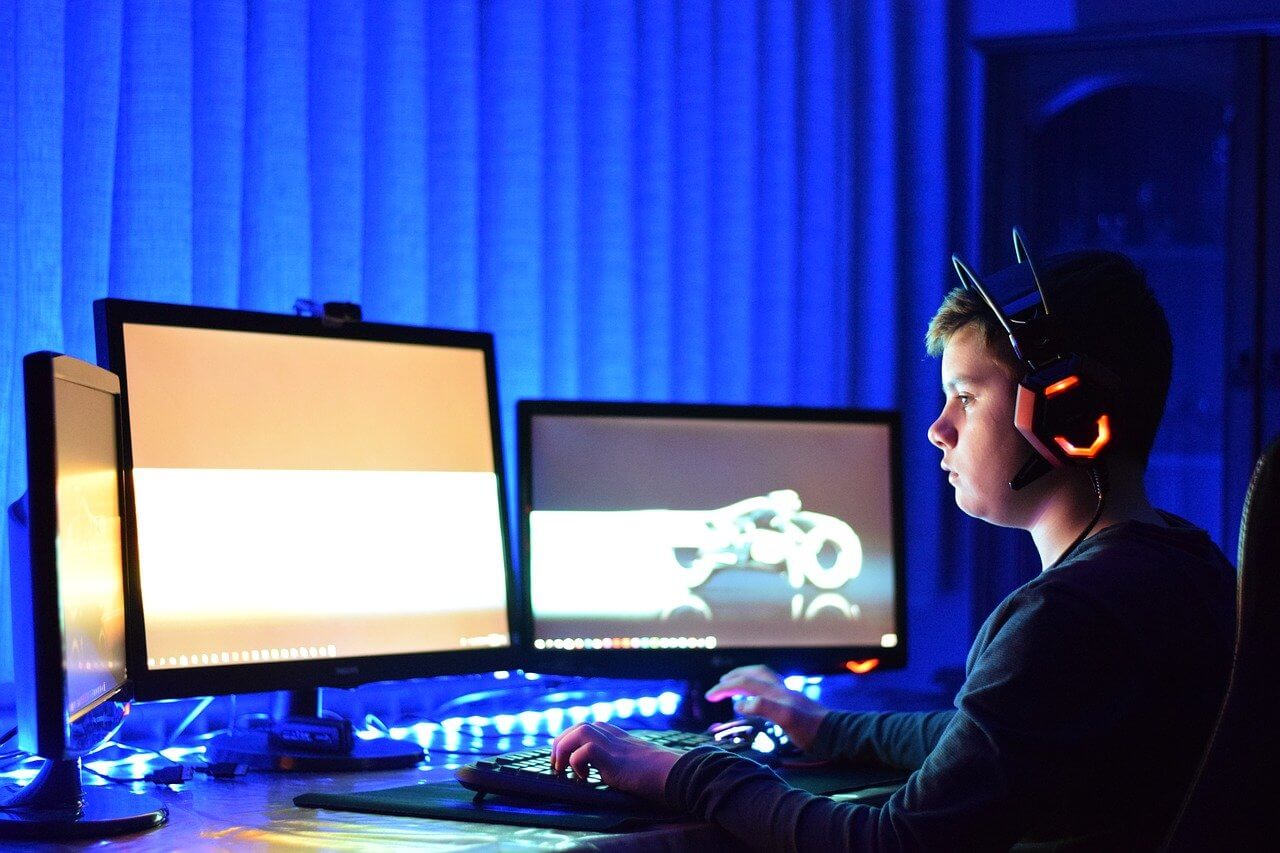 A borderline creepy use of facial recognition technology in games or the next great innovation in parental controls?

Tencent Games is a Chinese conglomerate who owns the most popular games nowadays but those games could soon be playing us.

Tencent announced that they will deploy facial recognition in games to identify underage players gaming at night. It’s a move with profound implications for the security and privacy of young gamers.

During China’s 4-week winter school break this year, school kids were limited to playing just 14 hours over the period, according to a calendar released by Tencent.

The announcement aligns with a Beijing crackdown on gaming from August 2021, where the the Chinese state agency National Press and Publication Administration (NPPA) announced that online game providers may only offer one-hour time slots — from 8 p.m. to 9 p.m. — to minors on Fridays, weekends, and official holidays.
How would they enforce the curfew?
Using facial recognition, of course.

The feature is available in China but could soon come in other countries, as more and more children spend unhealthy amounts of time in game – and, in the name of “security”, more privacy sacrifices are made.

Tencent Games’ “Midnight Patrol” sounds like a good idea on paper but takes on a threatening tone if you consider it further. According to the company, it’s a way to deter children and teenagers from spending too much time online and gaming at night.

“Children, put your phones away and go to sleep”

The system has been tested since 2018 and its success now means it will be deployed in more than 60 titles.

The first game to use this facial recognition tech was Honor of Kings, a popular multiplayer online battle arena (MOBA) game inspired by other titles like League of Legends.

“This test is an extension of Tencent’s existing Youth Guardian platform, which allows parents to monitor gameplay time and uses facial recognition, but this goes a step further by comparing user images with government photo records.

It is inevitable that this sort of technology will hold some limitations especially for younger children that go through a lot of facial changes as they grow,” said one expert.

Indeed, as we explained in our comprehensive biometrics overview, facial recognition technology comes with a lot of challenges and can be less secure than you’d think.

However, the current limitations on this tech aren’t stopping authorities or private companies from deploying facial recognition on kids.

One New York school district tested a facial recognition system to track “level 2 or 3 sex offenders, students who have been suspended from school, staff who have been suspended and/or are on administrative leave, any persons that have been notified that they may not be present on District property… [or] prohibited from entry to District property by court order… [or] believed to pose a threat based on credible information presented to the District.“

That was one test in a single district, so its results and impact were limited.

Parental Controls in Games – A Way to Curb Gaming Addiction or Slippery Slope Leading to Surveillance?

Now, with Tencent Games’ Midnight Patrol, potentially millions of children will have to give up their biometric data if the adults of the household decide to use these new parental control tools.

With China facing a veritable gaming-addiction epidemic and record screen usage times, in the past few years the government has started cracking down on the gaming industry and issuing more and more restrictions.

Children are not allowed to play video games between 10 p.m and 8 a.m., have to register on game platforms using their real name, and in-game purchases are capped.

Now, you might think that the gaming-addiction epidemic sounds like a scenario created by the media to feed the outrage machine but there are some troublesome numbers – and afflictions  behind it.

Too much screen time can induce near-sightedness or worsen an existing myopia condition and, in China, the number of people suffering from it is on the rise.

With 200 million of them playing the mobile game Honour of Kings, which has been called by a leading Chinese paper “poison” and “a drug”, it’s easy to see why some might welcome the Tencent facial recognition system to help control minors’ gaming addiction.

Does this sound like a Black Mirror scenario to you? It should.

In the second episode of Black Mirror’s fourth season, we saw a single mother trying to protect her child by signing her up to Arkangel. This implanted technology allowed the mom to track her daughter’s location to keep her safe. She could access her vision and hearing in order to censor distressing material.

Since it’s part of the Black Mirror universe, Arkangel takes the “guardian angel” aspect of parenting and turns it into a disturbing example of helicopter parenting… and the consequences it has on each family member.

Before turning on the webcam on children just to make sure they don’t spend too much time in Fortnite, you should watch (or rewatch) this episode. Then, consider these points and ask yourself – “Who watches the watchmen?”.

Every online company watches every move a user makes but there is little regulatory oversight on what those companies do with the data they collect.

Case in point: Tencent Games. Their privacy record is spotty at best, something which we’ll get to later but they are not alone in their behavior.

Is it really a good idea to let a gaming company see and control the way your child plays?

The entire gaming industry model is built on a predatory model, with games designed to be as engaging and addictive as possible (remember loot boxes?) on the front end, and data-syphoning systems on the back end.

In-game data collection is a phenomenon that arguably started with the innocent and ultra-popular Candy Crush and Angry Birds games from a few years back. Nowadays game makers have access to even more user data and behavior.

“But people should be worried. The intricacies of gameplay data can tell you a lot about what makes people tick, and what’s going on with them — studies have shown that you play games […]

Developers collect data on who was playing, for how long, how well, and how much money they were spending,” says a Vox report delving into how Angry Birds in-game data collection works…and skirts the law.

A privacy act called COPPA, passed in 1998, protects children under the age of 13 from being tracked by advertisers and prohibits those advertisers from assigning any kind of “persistent identifier” to children. Thanks to COPPA, it’s illegal to track children across apps, games or sites and advertisers cannot store children’s personal identifying information without explicit parental consent.

Another report from Polygon, a reputed gaming outlet, covers how the in-game data collection works and how it can be marketed.

“Nick Yee sells secrets. He knows what you like, what you don’t, and more importantly he understands why. He knows what motivates you, what stops you from achieving your best, what turns you off, and everything in-between.”

Starting off with an interesting hook about a game data seller, the report starts off with Nick Yee, who founded a survey company which sells his results to most of the gaming industry titans, Tencent included.

However, Yee’s data is gathered through voluntary questionnaires, which are then anonymized. This is a traditional, albeit antiquated marketing strategy.

Other companies simply prefer farming gamer data while they play the game, which, as you know by now, is all the rage in marketing. User data is the new gold and entire industries sprung around it, the gaming industry more so than others.

Here, you’ll see it in a term called “game telemetry”.

Game telemetry: are games spying on you?

This entails the collection, analysis and reporting of user data and behavior, so that game makers can update the game and fine-tune it to keep players engaged for longer.

If games spying on you or your children isn’t a concern for you personally, consider another aspect: why are games so addictive?

on their in-game behavior—from ﬁne-grained, moment-to-moment play behavior to summary game behavior such as number of levels reached,” says a study about game telemetry.

In-game data collection is used for two reasons: to sell that data later on, opening up new revenue streams for game makers, and to make games ever more addictive.

That’s a warning issued not just by privacy experts but by game developers themselves.

“The privacy side doesn’t worry me so much. The big risk is that it becomes weaponized addiction, that you design a game to manipulate someone’s physiology and dopamine responses with content.

“Imagine micro-targeted cigarettes that could deliver the cigarette right in your fingers the minute you’re feeling the most vulnerable,” warned Alex Champandard, a prolific game developer.

Now imagine that technology being used every second your child plays a video game because that’s exactly what’s happening, with real-time analytics being deployed in games big and small.

Take a look at what PlayFab, a Microsoft-owned platform, has to offer, in order to get an idea about the type of in-game data being collected.

Is Tencent Games Spying on you?

First, look at these incidents, then ask yourself if it makes sense to let Tencent Games use facial recognition on your children.

In January of this year, Tencent came under fire from privacy experts after it was found to scrape web browser history through its popular QQ Messenger, searching for keywords and storing the data it gathered.

This report came after, in 2016, the University of Toronto’s CitizenLab revealed that the QQ Browser, another Tencent product, regularly sent personal information back to Tencent unencrypted.

If Tencent uses its products this way, it’s clear the same goes for their games.

Sure, at a surface level, these parental controls in Tencent Games can help ensure a kid doesn’t sneak during the night and spends hours in a video game.

But if Tencent Games does so many things with in-game data, which is just a string of numbers and small decisions, what could they do if they saw every micro-expression on your child’s face?

If that question doesn’t make you frown, then yes, you should turn those new parental controls on.