Last week, we reported on leaked details about the Samsung Galaxy S9 and Galaxy S9+. With Mobile World Congress 2018 drawing nearer, we may have received even more leaked information. What seems like official press photos of the two highly anticipated Samsung devices have found their way online!

Winfuture.de claims to have gotten their hands on the Samsung Galaxy S9 and S9+ official images along with the phone specifications. They seem authentic as they match a Reddit user’s hands-on impressions of the Galaxy 9. 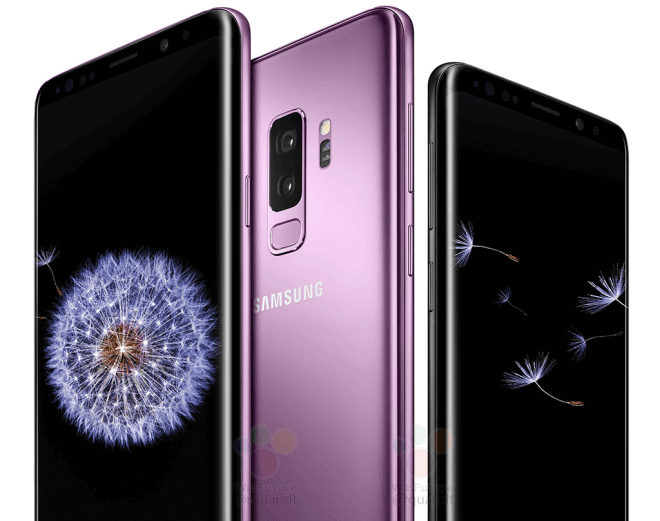 Among the announced specs, the Galaxy S9 and S9+’s camera upgrades are one of the many shining improvements. The Galaxy S9 phone comes with a single-lens rear camera with variable aperture – the image below shows images captured at f/2.4 and f/1.5. The aperture f-stop value determines how much light enters the camera and with a variable aperture feature, stellar photos can be taken both day and night.

Moreover, the teasers we previously reported on were indeed related to the slow motion feature; the Samsung Galaxy S9 camera is capable of recording videos at an amazing 960 FPS, 4 times more frames per second than the slow motion capturing system on the iPhone X.

The Samsung Galaxy S9+, on the other hand, combines two 12-megapixel sensors, one of them with variable aperture, the other one with a fixed one at f/2.4. Both sensors use optical image stabilization and a combination of laser and dual-pixel autofocus.

Each phone model will also have an 8 MP front camera with autofocus and an f/1.7 aperture.

Although the screens appear identical, there are a few key differences:

This recent leak also confirmed all previous rumors about the specs. Besides the ones mentioned before, here are some new details about each model’s specs:

UPDATE: Trusted leaker Evan Blass seems to give validity to the images posted by Winfuture.de in this Twitter post: