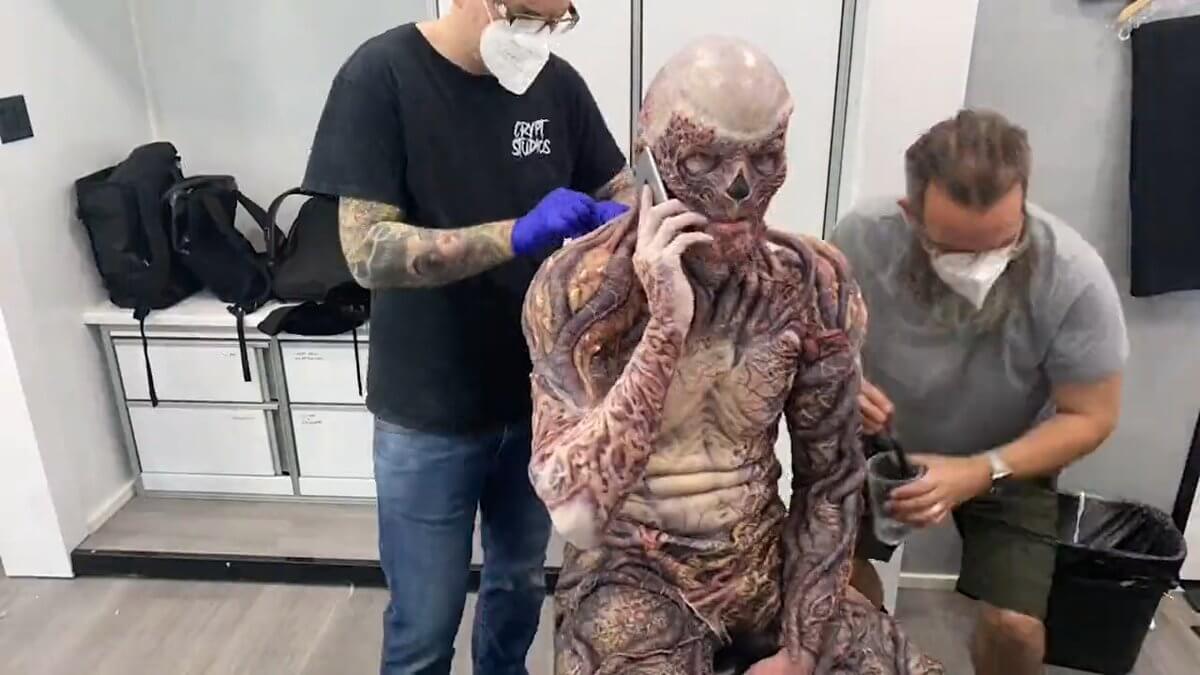 “Stranger Things 4” was so far a significant success, and likely the most terrifying season as it introduced a new villain Vecna – originated from Dungeons & Dragons and created with an elaborate set of prosthetics applied to actor Jamie Campbell Bower as the recent Instagram video demonstrated.

Special makeup effects and prosthetics artist Barrie Gower detailed the extensive process it took to transform actor Jamie Campbell Bower into the villain in a chat with Bloody Disgusting:

“We went from the sculpture over his lifecast. We had to separate the sculpture up into many parts, making molds. Then we just injected a couple of different materials into the molds. His makeup consists of silicone appliances and foam latex appliances. The foam latex pieces are the larger, heavier pieces on the body, which foam is naturally a lighter material; it was about 24 to 25 prosthetic appliances in a total of his makeup. We could only use them once. At the end of each day, we would remove the makeup, and they would be trashed because we’d be using mineral oil to remove the appliances, and they would destroy all the edges.“

The meticulous prosthetic work of the Dungeons & Dragons villain took to bring the character to life lasted for almost eight hours, and an additional hour at the end of the day to remove everything.

“We’d have duplicate appliances for every single shoot day, and we shot for maybe 20 days with Jamie in total, including two makeup tests. We made something like about 25 sets of appliances for him, but we made those all back at our studio in the UK. They are painted to the nth degree because it’s full-body coverage and all these pieces overlap. They’re glued with a medical adhesive directly onto his skin. You need all the artwork done as near as dammit to get the application time down. That still didn’t change. The first time we glued him into the makeup was about eight and a half hours for the test.“

Vecna was created from Maher’s design, but more grounded in reality, using a lot of elements from nature, like “photos of sea life, all kinds of different kinds of fish, lots, lots of things to do with trauma reference, like bruising to the skin, anemic skin tones, and looking at vines and all kinds of things.”

The full-body prosthetic makeup seemed to be the best choice when creating Vecna, and there was not a stunt Vecna on Stranger Things, as Jamie Bowe did all his own stunts for this show.

Stranger Things 4 Volume II arrives on Netflix on July 1st, and according to the trailer, Vecna is going to be a major focus of the new season.