Everything you need to know about DTS Sound Unbound, Spatial Audio & More 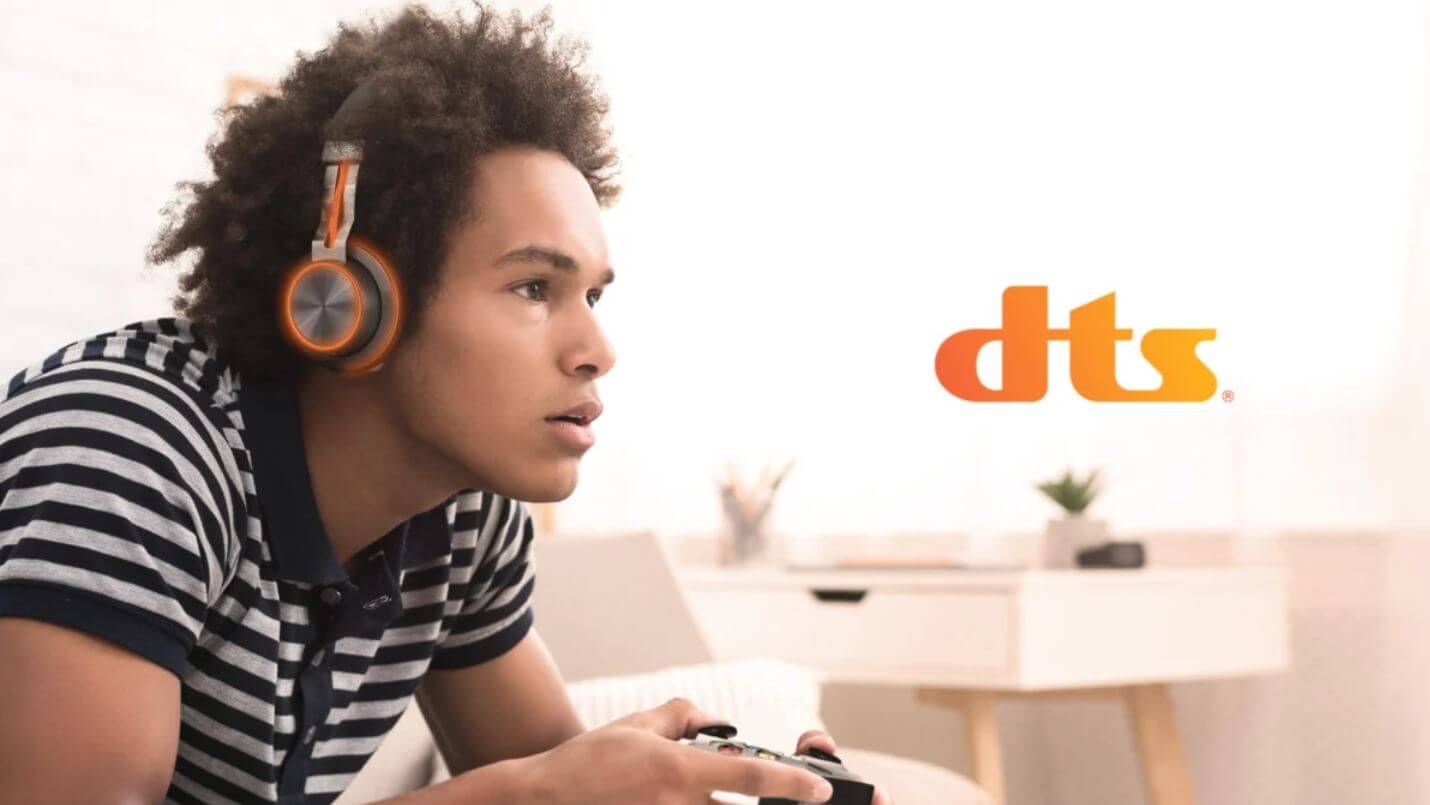 DTS:X, DTS Sound Unbound and DTS Headphone: X are basically household names for audio enthusiasts and pros alike but they can be pretty intimidating to understand if it’s your first encounter with these spatial audio codecs and software.

Want your movie-watching, game-playing and music listening experience taken to the next level?

DTS’s spatial sound is what you’re looking for – and we explain everything you need to know in this article.

What is spatial sound?

Before we get down to the nitty-gritty of what DTS:X is and how it works, let’s first see what spatial sound is.

In short, spatial sound or spatial audio is a way of creating sound in 360 degrees around you, the listener. It means you hear sounds from your devices like in real life, coming from all directions. If you’re watching a movie where a plane flies overhead, you’ll hear its sound coming from above you. If a gunshot happens to the left, you’ll hear sound from that side of the room.

Spatial sound can be object-based, found in speakers or TV, or binaural, found in headphones. There are multiple DTS spatial sound technologies and the naming can get a bit confusing, so let’s break down the major ones.

How does DTS Audio work?

In a nutshell, most DTS audio compression technologies handle spatial sound. They’re designed for theatres, home cinemas, desktop computers, gaming consoles or even regular headphones. We’re going to talk about the most popular ones for regular users, so that means DTS:X, DTS Sound Unbound and DTS Headphones X.

Let’s see what each one does.

What is DTS: X and how does it work?

According to the official description, DTS:X is an audio codec that delivers a multi-dimensional sound that “moves around you like it would in real life”.

Basically, it’s a flexible codec that can work with most speaker configurations from the past 5-6 years or so, since it launched in 2015. It supports up to an 11.2-channel system and 32 speaker locations.

You don’t have to buy any new hardware like a new surround speaker system for your TV or PC, or a new Blu-ray player.

The best feature? You can opt to adjust the volume of one sound object, like voices, so dialogue will be much easier to hear in loud movie scenes.

Most premium and a lot of middle-range AV receivers come with DTS:X support, from Denon to Pioneer, Marantz and Onkyo.

You’ll also get the DTS:X sound experience when you rent a movie with IMAX Enhanced on it, as these versions come with a special DTS:X codec that brings home the audio experience you get in cinemas.

What is DTS Sound Unbound?

Ok, now let’s get the complicated DTS naming system all sorted out and see what DTS Sound Unbound is and what it can do for your audio experience.

DTS Sound Unbound is the app that reunites DTS technologies for Windows and the Xbox One platform such as the DTS:X decoder and the DTS Headphone: X.

Using Microsoft Spatial sound technology to give you accurate sound localization, it creates a virtual 3D space, using an algorithm to make your ears hear more speakers than you actually have.

You can also customize the voices in movies or games so that you hear them more clearly during hectic moments.

You can download the DTS Sound Unbound app from the Windows App Store and try it for free. After that, you will have to purchase it to continue enjoying the 3D audio experience in games but it’s worth noting that the license covers up to 10 devices at a time.

Any headphones can work with DTS Headphone: X, and the app has more than 500 custom-tuned headphone profiles.

Want to try DTS Headphone: X? Just plug in your headphones and hit play on this video.

For casual music listening, DTS Sound Unbound (which includes DTS Headphone: X) will upgrade the hearing experience but not by much.

To enjoy the full effect, you’d have to have music in the native DTS Headphone: X surround sound format, and the library is pretty slim.

“Compared to audios specifically mixed for DTS, regular audio tracks won’t have the same wide soundstage and accurate instrument panning/positioning. Listening to regular audio tracks with DTS Headphone: X will only amplify some frequencies, and not really accurately pinpoint each instrument and vocal track for a 3D audio experience,” explains one reviewer.

Since none of the music streaming apps, from Spotify to Tidal, come with this format, DTS Headphone: X can enhance the sound somewhat, but not in a meaningful way.

What games use DTS?

Here are the PC and XBOX games with DTS Headphones: X support.

As you can see, it’s a pretty short list, due to the fact that this is still a new app and technology.

On the Xbox One platform, the capabilities are very impressive.

You can hear what DTS spatial sound does on the Xbox Series X through this short but memorable demo.

“Put on your headphones and walk in the dreams of Steve Saylor, AKA BlindGamerSteve. This immersive audio adventure was inspired by real dreams he had after experiencing Destiny 2: Beyond Light—and the spatial sound capabilities of the Xbox Series X. To capture Steve’s dreams, he was guided to a semi-conscious sleep state called hypnagogia.

When he reached this state—known to feel like light sleep and even meditation—he was asked to recall his dreams. Some of the greatest minds in history, like Aristotle, Thomas Edison, Edgar Allen Poe, and Mary Shelley, have tapped into this same dream state and used it to inspire their thinking. Once Steve’s dreams were recorded, they were brought to life in the form of a 3D Spatial Sound story,” explains Microsoft.

What movies have DTS?

Fortunately, the list of movies with DTS:X is a lot longer and grows pretty fast, in part thanks to the new IMAX Enhanced certification program.

Want to experience Dune, the best scifi movie of 2021, in an audio quality close to the theater?

Put on your headphones and listen to the trailer for Dune with DTS Headphones: X, with yet another unforgettable soundtrack from Hans Zimmer.

Many movies support DTS:X, with some recent titles being released in the IMAX Enhanced format for home. DTS’s own website lists the following titles but we’ll include below links to some more DTS:X movies.

Back at CES 2020, we spoke to Bruce Markoe, SVP of Post Production at IMAX, and he told us why IMAX Enhanced offers you the best movie watching experience possible outside of an IMAX theatre. You can find out more about this tech and its future in our interview, before seeing which movies are already available in this format.

You can see more movies on this list compiled by an IMDB user and existing IMAX Enhanced titles here.

Most of the new movies from Sony Entertainment are also going to be re-released in the IMAX Enhanced format.

The question of “Which is better, DTS or Dolby” is a hard one to answer, since it comes down to individual preference and pricing.

Dolby is the more affordable option but audio experts point out that DTS has a slightly higher audio bitrate, so enthusiasts should keep that in mind.

If, on the other hand, you’re a regular, casual user with a tight budget, then the choice is clear.

You can hear the difference between DTS and Dolby Atmos in this video.

How Much Does DTS Sound Unbound Cost?

And lastly, there’s the question of price and if DTS Sound Unbound is worth it.

DTS Sound Unbound has a license that goes $20, which seems like a hefty sum upfront but keep in mind – it’s a license for multiple devices and offers DTS:X from the get-go.

Only you know just how many devices you’ll use it for and how important your audio experience is but, in our opinion, sound quality is always a good investment.