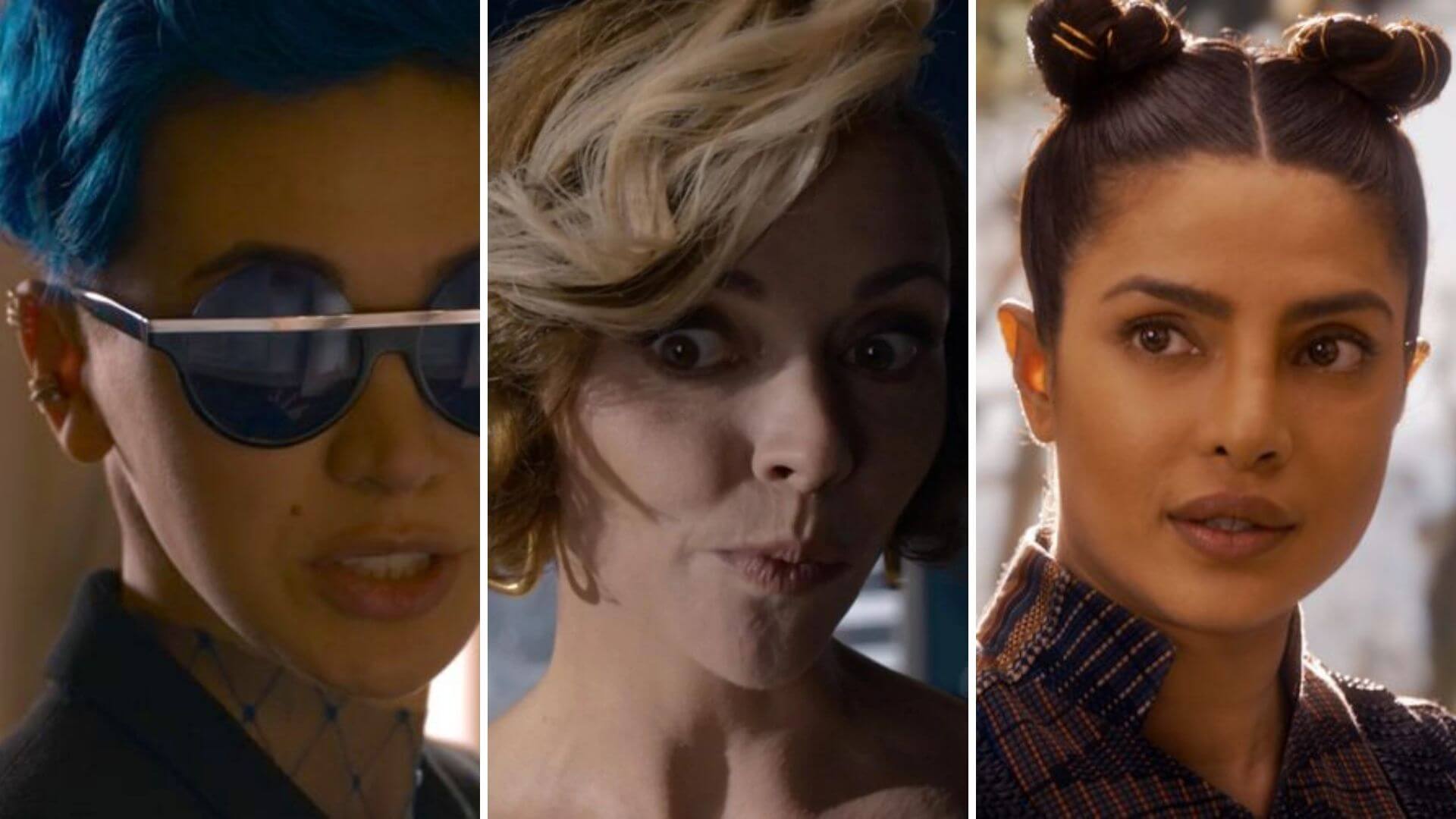 The Matrix was the reason why Keanu Reeves and Carrie-Ann Moss became wildly popular among moviegoers and Neo – Trinity, an iconic pair. Could the new Matrix Resurrections, released 20 years later, do the same for the new cast? And might Gwyn de Vere play a bigger role than we originally thought?

In The Matrix Resurrections, released just at the end of last year, the setup of our characters changes. We’re now meeting Neo as a game developer and Trinity as a married mother, both of them essentially strangers to the other.

While Thomas Anderson may have create an award-winning “Matrix” video game trilogy, he’s not his own boss. In fact, he still has to answer to Warner Bros. execs, as the company owns Deus Machina.

One of those execs is Gwyn de Vere, a ruthless exec determined to bring the “Matrix” game franchise back after 20 years. The pressure is on for Anderson, even if de Vere appears in a single scene and has a couple lines of dialogue.

By the end of the movie, we find out that Anderson’s colleagues, Jude and Smith, are in fact programs but de Vere remains a mystery. Is she human or machine?

The name, of course, is a wordplay on Guinevere which, in Welsh, translates to “White Enchantress” or “White Spirit/Spectre/Supernatural being”. Clearly, she is more than an ambitious businesswoman and could even turn out to be a villain, if Resurrections gets a sequel.

After all, Christina Ricci is the one playing Gwyn de Vere and her acting chops could obviously be used further.

However, she is not the only character worthy of building theories around. Other side characters we’ve previously met or were just introduced could play a bigger part than we may think.

Take Bugs, for example. She’s Neo’s and Trinity’s biggest fan and supports the duo throughout the film, after basically saving Neo from a false existence. Bugs is the one to open his eyes and help him break the vicious “Matrix” circle.

Then, you have Sati. A computer program we briefly met in the previous Matrix, she comes back disguised as Anderson’s co-worker. She’s decidedly against the machines, after the Analyst killed her parents, and lays out the plan to rescue Trinity.

Finally, there’s the Merovingian. We honestly thought we’d seen the last of him but nope, the guy is back. True, this time he’s almost unrecognizable as he’s out of his comfort zone and into some awful rags, as he leads a group of exiles.

Once again, the movie hints at Merovingian’s power, which supersedes what we’ve previously thought of him.

Matrix Streaming: Where Can I Watch?

If this is all news to you or you’re aware of the plot but didn’t get the chance to see it in theatres when it was released, you have another opportunity now.

You can stream the Matrix Resurrections on HBO Max, either through the web browser or via app.

Even better, you can revisit the older movies as The Matrix, The Matrix Reloaded, The Matrix Revolutions and The Animatrix are all available on the streaming platform.

The Animatrix is a collection of nine animated short films. The Wachowski sisters wrote four of them but they were not involved in the direction of any of those.

How to Watch The Matrix Movies in Order – Spoilers AHEAD!

After the original movie came out, all the Matrix movie titles started with the letter “R”. So, you might not know exactly in which order to watch them to get a chronological order of the events. Don’t fret – we’re here to land a hand.

1. The Matrix (1999) – this is the first movie in the series, the one where we meet Neo, Trinity and Morpheus for the first time. Thomas Anderson is an average programmer by day and a hacker by night.

While he’s always felt something was off about the world he was in, he doesn’t realise the extent of it until Morpheus contacts him and give him the famous “blue pill/red pill” choice. Neo risks it all in the search for the truth and find out humanity is trapped inside a simulated reality called the Matrix, ruled by machines that are using humans as energy sources.

2. The Matrix Reloaded (2003) – the sequel starts with an impending attack on Zion that our heroes need to stave off. Neo is following his own mission to find the Keymaker and reach the Source. He eventually does so and is once again faced with a choice. His love for Trinity saves her life but leaves him into a coma while the attack kills many with the exception of one.

3. The Matrix Revolutions (2003) – launched soon after The Matrix Reloaded, as the team filmed the movies back to back. The story picks up from where it left off, showing Neo and Bane unconscious. Eventually, Smith overtakes Bane and blinds Neo, but can’t incapacitate him.

He’s, therefore, free to meet the leader of the machines, Deus Ex Machina and suggest a truce: peace on Zion in exchange for Smith, who’s determined to conquer the machine world and the simulated reality. While the attack on Zion stops, Neo dies and the Matrix is rebooted.

4. The Matrix Resurrections (2021) – when no one was expecting it anymore, the Matrix was resurrected with Neo as game developer now. He’s pictured as an award-winning game creator who has used his faint memories of Neo to make “The Matrix”. Meanwhile, Trinity is a married mother with no recollection of the past whom Anderson meets in a coffee shop again and again and models his game character Trinity after.

Matrix 5: Release Date and Other Rumors

Where are we now? Is Resurrections the end of the Matrix story?

Most likely. Keanu Reeves has said that the director, Lana Wachowski, “would not do another Matrix”. However, if she were to change her mind, he’d be willing to reprise his role.

That’s encouraging news although Wachowski explained that she did the 2021 movie for personal reasons, tied to her parents’ death. Something drastic would need to happen for the direct to revisit the series. If that happened, we’d probably get tickets for it in 2024, at the earliest.

The Matrix: Resurrections does leave room for a continuation. The good triumphs, and we see Neo and Trinity defeat the Analyst – the program responsible for reigniting war -, so you could say we had our happy ending.

Since the duo is determined to make the Matrix a more wholesome place, we can see that sparking new ideas for writers. Plus, we are left with the knowledge that even the Analyst has a boss, “Suits”, so confronting them could happen.

If the main cast returns for Matrix 5, then we should see Bugs and Sati show up too. And even if it doesn’t happen in movie format, we might find out our heroes’ future in video game form.

Given the 2021 movie premise and Epic Games’ The Matrix Awakens, a Matrix story you could actively participate in would not be out of the question.