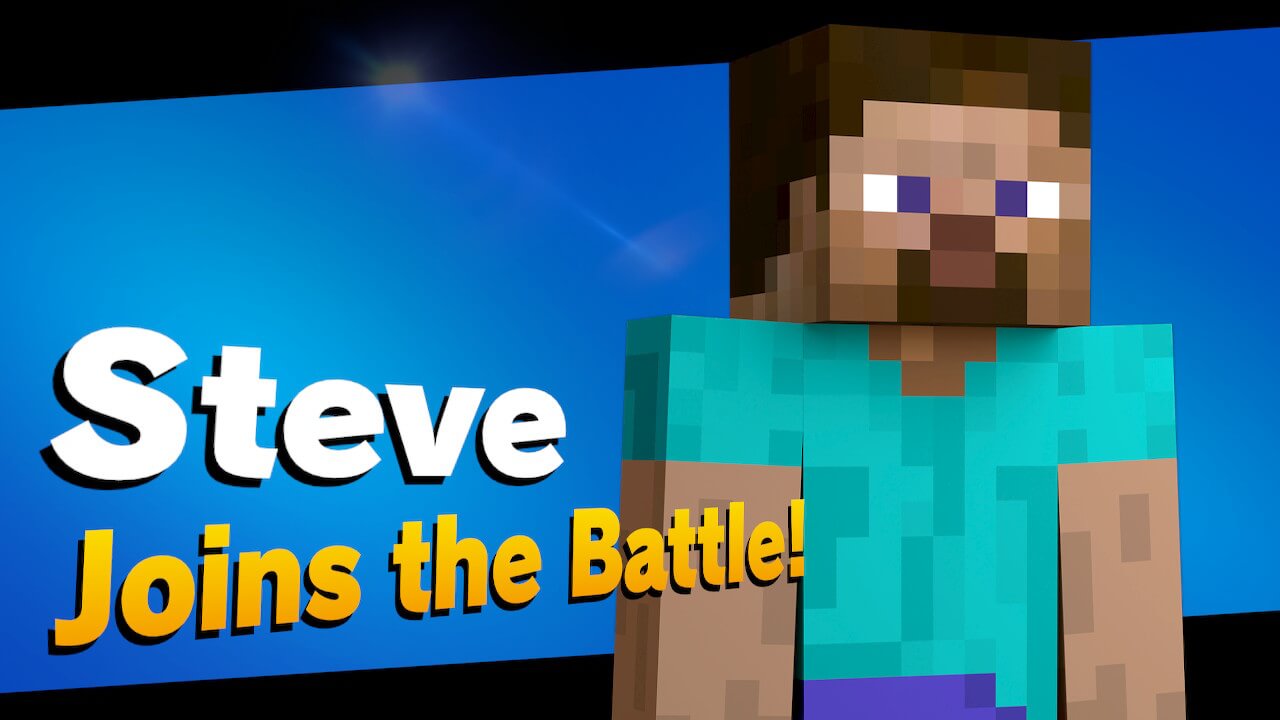 Well, the day has finally come: Minecraft Steve is in Smash. With about a week of gameplay under my belt, I can firmly say that it kind of feels like I’m playing Minecraft more than I’m playing Smash.

As described in “Mr. Sakurai Presents,” Steve’s gameplay revolves around his ability to mine and craft. His resources are central to almost all his moves, from building block, to upgrading weapons, to even being able to use certain moves. So resource gathering and managing become central to his gameplay.

This feature is most similar to Robin’s and Hero’s magic power meter, where after losing all your magic power you can’t use any spells. However, resources are more vital to Steve’s kit than they are either Robin’s or Hero’s. Both those character at least have relatively strong non-magic based attacks and their magic refreshes over time. Steve, on the other hand, is almost reliant on the resources as even basic attacks like tilts are reliant on whether or not he has the materials to make the weapons. Additionally, getting those resources back is an active process.

Because of this aspect of his design, I will say that 1-on-1 games presented more of a challenge than free-for-alls did. Whereas more traditional Smash fighters focus on approaching or waiting for openings to approach, a big part of Steve’s gameplay is creating time and space to mine. In a sense, I had to find a way to get to a corner safely enough to avoid attacks. If the other player(s) keep applying pressure, it becomes hard to find that space.

Unfortunately, Steve’s ways of getting out of pressure – placing blocks, mine carting, or even throwing the enemy off-stage – require materials to do in the first place. At low percentages, attacks don’t have enough knockback to give you the space to mine. Without some luck or extreme skill, it can make 1-on-1 games difficult to come back from. In free-for-alls, I was able to use the chaos to find that space. It is just a funny image seeing Steve mining on a corner of the stage while Mario, Cloud, and Mega Man are fighting on the other side.

Once I got the hang of how to gather resources safely and manage them well, Steve’s move set really allowed me to get creative. I could drop unexpectedly from the sky using his anvil (down aerial) or place several blocks (b in midair) to impede enemy movement. I found it especially fun to extend combos by placing blocks off-stage and attacking from this new platform.

And it’s not like he doesn’t have strong kill options. His magma block (up smash) and mine cart (side special) are relatively quick and powerful options that kill at lower percents. A well timed diamond sword smash attack can also send enemies flying off stage early.

However, it’s perhaps too early to speak about Steve’s viability in the competitive scene. For starters, I’m definitely not the best player out there. But also, players are only starting to find out how his unique tool kit can be used. There are already a few wild Twitter combos out there, some of which have utility in games.

It’ll be interesting to see what people do with Steve. He feels like a high ceiling character, one that requires a lot of practice and creativity to meet his full potential.