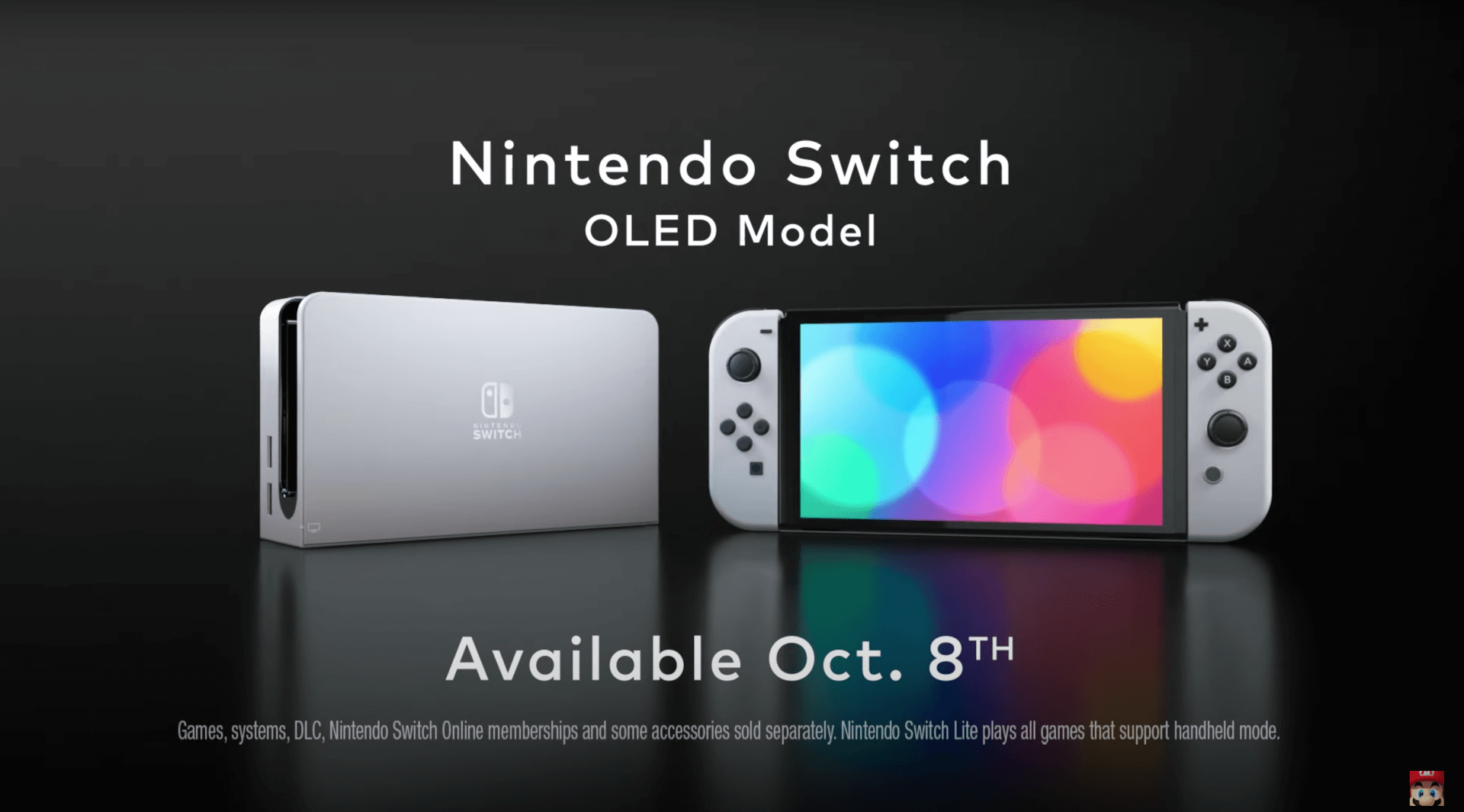 The Nintendo Switch OLED Model was announced this morning.

With the Switch OLED Model comes a new 7-inch OLED screen, new wider kickstand, enhanced audio, more internal storage, and a wired LAN port integrated into the dock itself. These are not minor upgrades, especially for handheld and tabletop players.

But this is certainly not the much rumored Nintendo Switch Pro.

In March, Bloomberg reporters stated that their sources believed Nintendo was preparing to release a 7-inch, 4K-enabled Nintendo Switch. These statements did not come out of nowhere, as an earlier report in 2020 stated that the company “has looked into including more computing power and 4K high-definition graphics.”

Instead, the OLED Model is a slightly revised version of the original. Nintendo Life compiled a list of the specs from the standard Switch, the OLED Model, and the Switch Lite and most of internals are the same. The OLED Model still runs on the same CPU/GPU, only outputs to 1080p in TV mode (up to 720p in portable), and has the same battery life as the standard model.

A statement by Nintendo to VGC further confirmed that the OLED model would have much of the same internal specs as older versions.

While not having 4K output or upscaling is disheartening, some may argue that it’s not necessary for Nintendo consoles. At least for now, Nintendo first-party games have not relied on graphics and photorealism to sell their games. Mario, Legend of Zelda, Pokémon, and more are franchises which have excelled because of their gameplay. They are simply fun to play.

The aesthetic style of the games, as well, lend themselves well to lower resolutions. Breath of the Wild’s cell-shaded style looks gorgeous on the Switch even without the 4K resolution option.

Reporters from The Verge to Kotaku have justified the improvements in the OLED Model, variously stating that new model is enough, the average consumer (and new consumers Nintendo is looking for) won’t care about 4K or higher graphics, Nintendo shouldn’t rock the boat with its already successful system, and the Switch is really fine as it is. Even a Nintendo marketer has stated the design purpose of the OLED Switch is not for power: “stick with the current [Switch] if you’re not digging the screen [of the OLED model]” (source: VGC).

While many, this author included, are disappointed that the release doesn’t match the plethora of rumors, Nintendo is not beholden to this. At the end of the day, rumors are just rumors. The company has never promised it would release a Switch Pro, so until they do make such an announcement, consumers should not expect that the company will release said system.

And yet, it’s not unreasonable to be bewildered or frustrated with the OLED Switch announcement.

The Nintendo Switch is not an infallible console. Rumors aside, the system has several glaring spaces for improvements which range from quality of life improvements to necessary upgrades to match contemporary gaming needs.

Realistically, the upgrades from the OLED Switch could be best described as addressing quality of life issues. The larger screen, enhanced audio, and better kickstand help make the portable gaming experience more enjoyable. The integrated LAN port takes out wiring.

But, to be honest, these upgrades do not address the core issues that have plagued the Switch since release.

The first major issue the Switch has is with its power. As more games have released, it has become blatantly obvious that the Switch is just not powerful enough to handle the contemporary gaming landscape. Games have started to look and feel bad, especially when played in handheld. Even the first-party (or adjacent) titles like Hyrule Warriors: Age of Calamity and Xenoblade Chronicles: Definitive Edition can run so painstakingly slowly or look unbelievably clunky that it becomes near impossible to play. The latter actually gave me headaches while playing because of how poorly the software looked on the Switch. And that’s for an enhanced port of a 2010 Wii game.

To be clear, this issue doesn’t only pop up in open-world games or ones with many things going on all at once. The same issues occur in even the relaxing social simulator game Animal Crossing: New Horizons. As the islands naturally became filled with stores, villagers, and items, the game started to slow down and lag.

Third-party games, too, suffer the same fate. Ports of more taxing games like The Outer Worlds are just so much worse to play on Switch that it’d be better to play it on a different console if possible. Even less taxing games, like indie games, can fail to run on Switch. For example, there were several times in my Ori and the Will of the Wisps playthrough were the map loading could not keep up with my movement, resulting in my death from not-yet-loaded obstacles or enemies.

And as games become more adventurous and expansive, it is clear that the Switch cannot keep up. Look no further than Pokémon Legends Arceus. It is actually unclear if the aesthetics and gameplay were intentional choices or failure of the hardware to meet The Pokémon Company’s visions. It could also just be a pre-launch trailer to be worked on, but that we are unsure speaks a lot to the expectations the community has of the Switch that it wouldn’t be able to handle such a game.

Having more internal power does not mean or equate to 4K. But it is asking that games run steadily and perhaps look a little crisper. Even non-hardware taxing games would benefit from more steady framerate or quicker loading times. When games cannot be played or play dramatically worse than expected, the issue is more than just quality of life.

The second major unaddressed issue is Joy-Con drift. The problem with drifting on the Joy-Cons has been present since launch, with Nintendo even addressing the issue at one point. Drift leads to inaccuracy, wandering players, and unintended consequences. A slightly annoying, but overall harmless example is how drift would cause my shot to redirect in Mario Golf: Super Rush.

All in all, the OLED Model will sell whether to new consumers or to those who already own a Switch. In a vacuum, the upgrades themselves are also nice to have and will definitely elevate the playing experience.

But they fail to substantially upgrade the Switch itself.

It’s like buying a car. The OLED Model provides the add-ons, but doesn’t change the engine or the car itself.

Nintendo could have given us an all new car which addressed everything that should be better with the old one. But they didn’t.

Maybe that’s still down the line somewhere for the larger Switch family.